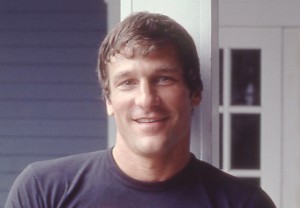 Jean Frottier, as owner of Gifford House, by David Jarrett (1981).

There had been recent tragedies at sea — Fernando Ribeiro died on Charlotte G. in 1999 and John Woods aboard Dixie II in 2010 — but the town had gone 28 years without a fatal sinking until 18 November 2012. Capt. Jean Frottier, a charter member of the Provincetown Fishermen’s Association and former owner of the Gifford House, was scalloping with Eric Rego aboard the 40-foot fiberglass Twin Lights, built in 1985 by Young Brothers & Company of Maine. Two miles north of Race Point, the scallop rake became entangled. As Twin Lights came around to straighten it out, she rolled over in a swell. The crew of the nearby Glutton rescued Rego, but their efforts to make contact with Frottier by knocking on the overturned hull were fruitless — a chilling echo of the S-4 disaster. After 40 minutes or so, Twin Lights sank in about 190 feet of water, bearing her captain along.