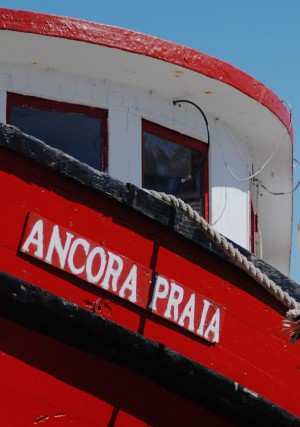 In red-and-white livery, the 58-foot Ancora Praia was an especially handsome wooden fishing vessel, built in 1963 by Hoyle Varnum in North Carolina, according to BoatInfoWorld. She was purchased in 1984 by Capt. Fernando Lomba, a native of Vila Praia de Âncora, Portugal, and steamed with a three-man crew. Disaster struck in 2007 when a spark from an acetylene torch fell into the oily bilge, starting a fire that spread through the hold before moving to the pilot house. Lomba’s efforts to recover from the fire were frustrated by the aging, uninsurable vessel and the increasingly strict federal management of the fishery. In 2011, Ancora Praia was taken out of the water. Her new owner, Capt. Tobin Storer of Probable Cause, intended to transform her into a mussel barge for an aquaculture site off Wellfleet, extending her marine service. Unfortunately, she sank at Wellfleet.