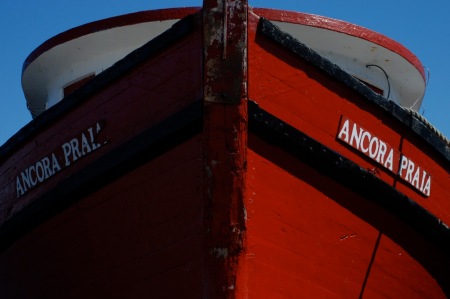 The Ancora Praia — “beach anchor” in Portuguese — was a 58-foot, 45-ton, wood-hulled dragger built in 1963 by Hoyle Varnum (BoatInfoWorld). She was purchased in 1984 by Capt. Fernando Lomba, who was born in Vila Praia de Âncora, Portugal, and had been a commercial fisherman for seven years. She steamed with a three-man crew, including Captain Lomba. She was included among the boats pictured on I Am Provincetown.

Disaster struck in 2007 when one of the crew members was cutting a muffler with an acetylene torch to inspect a noise. A spark fell into the oily bilge, starting a fire that spread quickly through the hold before moving on to the pilot house. About 40 firefighters were needed to extinguish the blaze. (“Dragger Catches Fire,” The Banner, June 29, 2007.) Like the other wooden vessels, the Ancora Praia was uninsurable. Lomba, not entirely daunted, set out to repair his vessel and return to fishing. (“Time Takes Toll on Provincetown’s Vintage Fishing Fleet,” Cape Cod Times, July 4, 2007.) “You love your boat,” he told Mary Ann Bragg.

But Lomba could not make it much longer on the aging vessel under the increasingly strict fishery management regime. In the spring of 2011, the Ancora Praia was lashed to the “Portygee railway” alongside MacMillan Pier. Her new owner, Capt. Tobin “Toby” Storer, skipper of the Probable Cause, told me he intended to transform her into a mussel barge for an aquaculture site off Wellfleet. She would, at least, continue to work — after a fashion. Yet seeing her stripped down and beached was a very dispiriting sight, indeed; one more vestige lost of the maritime past. 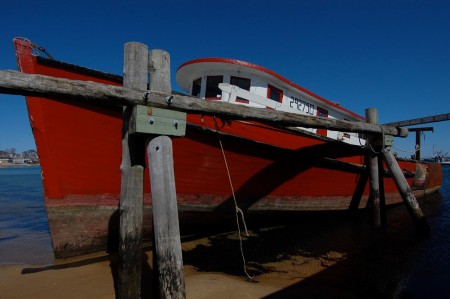