Almost directly opposite the end of Shank Painter Road, across Route 6, appears a large clearing in the woods. If you go exploring there, you’ll not only be stepping back into Provincetown history, you may even be stepping on Cuban soil — if local legend can be believed. For this was Evans Field, graded and constructed in 1905 on what had been the cranberry bog of Joe Holmes, by officers of the North Atlantic Fleet, under the command of Rear Adm. Robley D. “Fighting Bob” Evans (1846-1912), for whom the field was named. Best known for leading the Great White Fleet on a round-the-world projection of America’s growing power, Evans is pictured at left.

Evans Field was intended as a place for sailors in port — on occasion, 4,000 at a time — to let off steam innocuously by sprinting, running and playing baseball. “Six battleships sent working parties and in two days they created a quarter-mile running track with a baseball diamond in the center and laid out lines for a 100-yard dash,” Irma Ruckstuhl wrote in Old Provincetown in Early Photographs. Tradition has it that the sailors used Cuban soil, brought to the Cape as ballast, to grade the field.

Because the games were played on Sunday, and because homemade brew was being consumed by some of the sailors — to the usual effect — the local clergy had at least a nominal reason to object to the arrangement. And they did so. Evans, reportedly angered by the town’s inhospitable attitude, said he would take the fleet elsewhere. In 1906, the Board of Selectmen attempted to appease him, extending an official invitation through the Secretary of the Navy “to make Provincetown Harbor the rendezvous for the naval fleet under his charge.” Unfortunately for local entrepreneurs and civic boosters, the damage had been done. Ruckstuhl recorded that only a single vessel, the U.S.S. Louisiana, spent a long time at anchor that summer, the other ships of the Atlantic squadron coming and going briefly.

Evans Field survived the departure of the Navy, but it never had an easy time overcoming its origins as a bog between Clapps Pond and Duck Pond. The Provincetown High School baseball team found in the 1930s that it was unusable without further grading. The problem persisted for decades. A horse show planned there in 1959 was canceled because the ground was considered too muddy; a special hazard for jumping horse who would could not get the needed support underfoot to clear the hurdles before them.

All the same, the field was used for Provincetown High School football at least into the 1960s, if not longer. But the perpetual fight against the bog was at last given up and Evans Field is no longer in use. You can still see the batting cage, which looks like a bit of minimalist abstract sculpture. Watch your tracks as you traverse the field: there are still benches hiding in the tall grass. • Map • Posted 2013-08-18 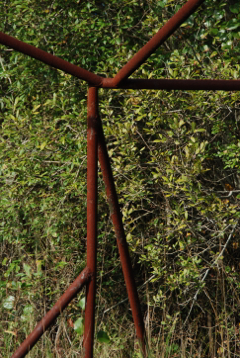 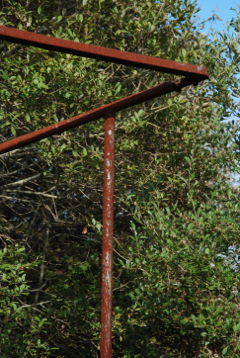