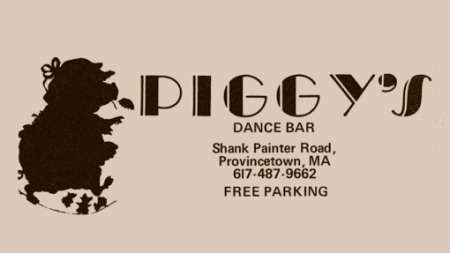 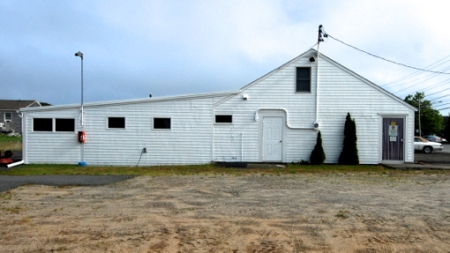 “Mixed, gay, bi — it was a bazaar that promised to satisfy every taste,” Peter Manso wrote in Ptown: Art, Sex and Money on the Outer Cape. John Waters, too, described Piggy’s as “totally mixed, gay and straight,” in an interview with Gerald Peary for Provincetown Arts (Volume 13). “That’s my favorite kind of bar,” he added.

Before it was Piggy’s, it was Frank DeMello’s Pilgrim Club, which moved here in 1962-1963 from 323½ Commercial Street, when the downtown space was annexed by the Old Colony Tap to become the Rumpus Room. To compensate for slow business, DeMello soon obtained permission from the selectmen to stay open until 3 a.m., though he had to stop serving liquor at 1 o’clock. Phil Tarvers was the manager in 1966, when a band called Phluph played nightly at the club.

He was succeeded in 1967 by Marjorie Pell Oliver, who had formerly operated the Colonial Inn, 586 Commercial Street. (She was running the inn in 1940 when the First Lady, Eleanor Roosevelt, stopped for an evening to escape the crushing pressures imposed by her husband’s campaign for a third term as the war in Europe worsened.) Oliver was responsible for booking the Wesley Thomas Combo from St. Croix.

Among the earliest references I have found so far to Piggy’s, suggesting that it was a nickname at first, comes from John Francis Hunter’s 1972 guide book, The Gay Insider USA: “Piggie’s (officially the Pilgrim Club) out on Shankpainter Rd. was also ‘in’ this summer, and after season became the big draw after the A-House big room closed. It’s a mixed place, but no one cares. However, slow dancing is not permitted between boys.”

The very next year, writing pseudonymously as John Reid, Andrew Tobias mentioned the club in The Best Little Boy in the World:

All that happened of significance that weekend is that as Piggy’s was closing, having found no one to go home with — and home was an extravagant $20 motel room that I was loath to waste, not to speak of the blow to my ego of sleeping alone on a Saturday night in Provincetown — as I walked toward the door, I saw Chris, the Harvard Business School student Eric had introduced me to, one of Golden Boy’s friends, looking a little drunk, a little dejected by the door. Not really my type, but better this than nothing.

Tobias almost makes it sound sedate. Waters does not. “It was outside of town and everyone had to walk home,” he said about Piggy’s in a 2008 interview, “and every person would just have sex in the graveyard along the way. I mean, those days will never happen again.” When asked if were sorry they wouldn’t, he replied, “That would be a little pitiful, hangin’ around the graveyard like, ‘Hey! You need a ride?’ No, I think for my dignity — I mean, old chickens make good soup — I’m glad I’m not out in the graveyard.” (Ariel Levy, “Still Waters,” New York, 24 March 2008.)

Dennis Dermody recalled the adventure of spinning records there in an interview with Gerald Peary for Provincetown Arts. “It was really bizarre,” he said. “You had two turntables, you weren’t in a booth, and people literally would come up and rip records out of your hands. But you could mix anything. I remember on some J.F.K. memorial day, I played a John Kennedy speech, and then Junior Walker’s Shotgun could be heard coming up in the background. People laughed!” 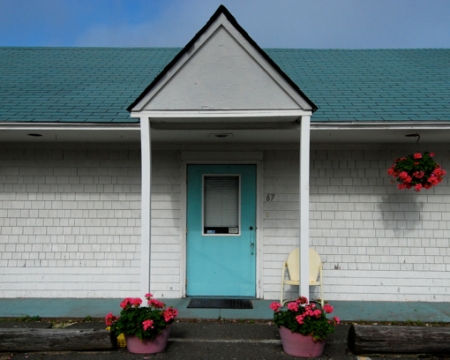 Not everyone was amused by Piggy’s. Not by any means. Police Chief James J. “Jimmy” Meads Sr. (1933-2011), for one. He staged what Manso called an “interdictive strike” against the bar one night, arresting men for dancing with other men. An Advocate reporter who spoke with Manso said that Chief Meads made those legally tenuous arrests because Meads understood a greater truth: that the scales were tipping in favor of queer Provincetown. “He saw the deluge, you know, that the dam was bursting and he thought, ‘Somehow I’m going to stop it right now, and it begins here at Piggy’s.'”

Of course, it did not stop at Piggy’s. But the bar itself eventually faltered. By 1982, it had become a club called Captain John’s. Something of its old spirit was revived later in the 1980s and early ’90s, when it was known as the Love Shack. “Piggy’s was wild fun, as was the Love Shack!” said Ryan Landry.

The property was owned during its nightclub incarnations by Matthew J. Costa, through the Provincetown Golf Range corporation. He sold it in 1995 to Cynthia Gast.

It’s been a long while now since a club operated here. But I am impressed by what many of those who remember Piggy’s have told me: it may have been the last time Provincetown danced together as one.