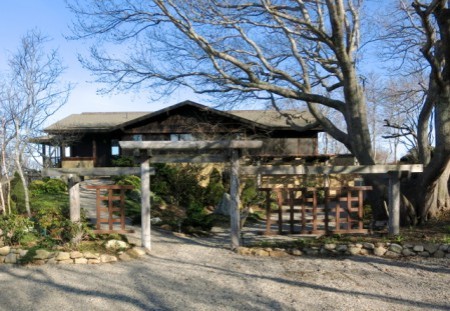 Most people do not know about this hilltop house. That’s fine. The tranquillity of this distant-seeming place is part of its appeal. William and Emily (Prada) Gordon, proprietors of the abutting Chateau Provincetown, built the main house (originally 7B Point Street) from 1977 to 1978, so they could move out of the motel. In 2009, the Gordon family sold it to Dr. Jerome Crepeau and Louis Lima, who had previously discovered about 130 immured “mudheads” at 22 Brewster. They did not try to wrangle the design of the Gordon house into something it wasn’t. Instead, they worked with its low, horizontal lines. For inspiration, they turned to the Katsura Imperial Villa, outside Kyoto, which had influenced midcentury architects in America. They are also converting an unbuildable hillside lot at 7A Point Street into a large garden.