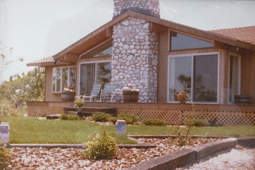 Most people — even longtime residents — do not know about this hilltop house, renovated with some respectful cues taken from the Katsura Imperial Villa, outside Kyoto. (A current photo of the house is above. The picture at right shows it before renovation.) Most folks could probably not even find 11 Oppen Lane on a map. And one imagines that the owners don’t mind this at all, since the tranquillity of the distant-seeming place is part of its great appeal. The property even has a different provenance than the rest of those on Oppen Lane. It was not part of the Oppen family holdings on Telegraph Hill.

Rather, it was owned in the early 20th century by Alice G. (Goodell) Grozier (1864-1943), wife of Edwin Atkins Grozier (1859-1924), of 160 Commercial Street, and — with her husband — a majority stockholder in The Boston Post. Grozier had acquired the property in 1900 from Seth and Fannie C. Smith. After her death, the property was briefly in the hands of the New England Telephone and Telegraph Company (had Mrs. Grozier not paid her phone bill?), which sold it in 1948 to George D. and Grace K. McDonald.

McDonald bequeathed the property to Marguerite M. Richardson (a/k/a Margaret Lynch), to whom it passed in March 1976. As a footnote to history, McDonald’s executor in the transaction was William King, the skipper of the Patricia Marie, who was to perish at sea seven months later. In fairly short order, Richardson sold the property for $24,500 to William H. Gordon and Emily P. Gordon, proprietors of the abutting Chateau Provincetown, 105 Bradford Street Extension. It was the Gordons who built the main house on the property, from 1977 to 1978, so that they could move out of their living quarters at the motel. 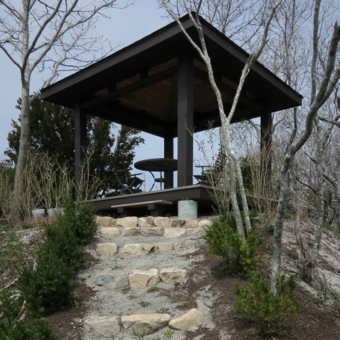 The property remained in the Gordon family until 2009, when it was sold to Dr. Jerome C. Crepeau (b 1953), an otolaryngologist, and his husband, Louis L. Lima (b 1953). Crepeau and Lima had previously owned 22 Brewster Street, in which they discovered about 130 immured “mudhead” paintings and studies. (Sue Harrison, “Hidden but Not Lost,” The Provincetown Banner, 27 October 2005.)

Eleven Oppen Street used to be denominated 7B Point Street, but the necessary legal access to the house now comes from a 20-foot-wide strip of land paralleling Oppen Lane and running all the way to Bradford Street Extension. The Gordons’ property also included 7A Point Street, an unbuildable abutting hillside lot that Lima and Crepeau are converting into a large garden, reached by a gently sloping and curving path from the main house. The couple are also able to enjoy a small open-air pavilion on a look-out point that commands a splendid panorama of Cape Cod Bay, including whale spouts on the best days.

Wisely, they did not try to wrangle the design of the house — Sunset Magazine Modern, you might call it — into something it wasn’t, like Shingle style or a full Cape. Instead, they worked with its low, horizontal lines, borrowing what they could of Japanese aesthetics. For inspiration, though not imitation, they turned to the 17th-century Katsura villa. That’s not as unlikely an approach as it might sound, since Katsura certainly influenced midcentury architects in America; perhaps even the architects of 7B Point Street. (See the diptych immediately below.)