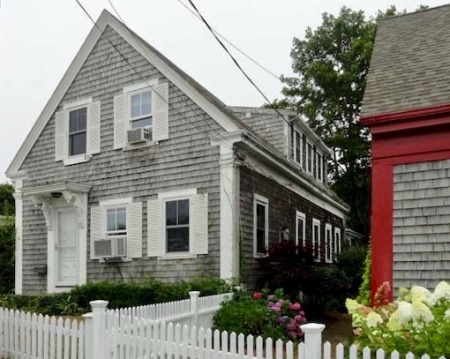 The Italian barque Castagna, long overdue from Monte Video for Boston with phosphate rock, hit the perilous Peaked Hill Bars during a 60-mile-an-hour snowstorm and gale in February 1914. In the freezing night and mountainous seas, the crew were too numb to make use of the breeches buoy whose lines Surfman Joseph Francis (1883-1936) and his mates from the United States Life-Saving Service had shot out to the stricken vessel. The surfmen were forced to wait for a lower tide, lesser wind, and calmer seas. But Francis and the others finally managed to rescue eight sailors from the complement of 13. “If it were not for him the results might have been different,” Donna Silva, Francis’s great-great-niece, told me in 2020.

This house and 16 Prince Street next door were at various times owned and occupied by Francis; his wife, Ellen T. “Nellie” (Marshall) Francis (±1878-1960); their daughter, Ethel E. (Francis) Ross; Ethel’s husband, George A. Ross; and the Rosses’ daughter Ellen (Ross) Cook. (Ellen’s sister Josephine married Raymond G. Alves of Galeforce Farm.) It was sold out of the family in 1998.

Joseph Francis stayed with the Life-Saving Service as it was transformed into the United States Coast Guard. In 1936, Silva related, he and another man were working on a battery in the basement of Station Race Point. “It exploded,” she said, “engulfing Joe in fire. After several months in the naval hospital in Chelsea, he succumbed to burns that covered most of his body and died.”

Joseph Francis in an undated photo, courtesy of Donna Silva.

14 Prince Street on the Town Map.

One thought on “14 Prince Street”