This sweet cottage is an especially poignant place for my husband and me. It was where we spent our last week before the terrorist attacks of 2001 transformed American life, and so it will always seem like the embodiment of a lost age. At the time we stayed here, 21 Point Street was part of Westwinds on Gull Hill, 28 Commercial Street, run by Roger M. Hanzes (b 1941). We knew even before we departed, on 8 September 2001, a day after I made the sketch above, that we wouldn’t be returning the next season.

Hanzes told us that after 18 years of the grueling bed-and-breakfast routine, he planned to sell the main property and make this cottage his home. We were awfully disappointed, since it seemed to be just about the perfect place to stay. “This is truly our ‘little home, just meant for two,'” I wrote in my journal shortly after our arrival, “with a big, comfortable bed; well-equipped kitchen; day bed; drop-leaf dining table; 1920s map of Cape Cod — perfect summer-relaxed, cast-away, hand-me-down informal, complete with that ever-humid, screen-window, house-in-the-woods, salt-air smell. And no one upstairs or downstairs. Or even next door. Just ideal.”

Ivy geraniums filled the window boxes and clematis climbed the walls fragrantly. “About the only caution Rogers offers is that we might notice the nocturnal comings and goings of a raccoon who lives under the house,” I wrote. Indeed, we did. And, as this picture from 2013 shows, 21 Point Street is still a home to wildlife. We also had the opportunity during this stay to meet Stanley Kunitz and Elise Asher, who lived just two doors down. A day later, we presumed to greet him when we spotted him in his garden — “Hi, Stanley” — and he couldn’t have been more gracious. It was a magical time.

Hanzes bought the 28 Commercial Street-21 Point Street property, together with Lloyd B. Salt II, in 1983. The history of the property can be traced clearly back to 1862, when Joshua Paine conveyed it to Walter R. Abbot (also spelled Abbott).

At the age of 29, Abbot was lost at sea. The property passed to his widow, Achsah (Snow) Abbot, and in time to their only child, Rosetta R. “Etta” Abbot (b ±1864), who lived until the early 1950s. From Etta’s estate, the property passed into the hands of Marjorie A. Adams, who sold it to Eleanor Juanita Dalton in 1953. Hanzes and Salt paid $275,000 to buy the property from Dalton’s estate. Hanzes still owns 21 Point Street and the nearby garage at 27 Point Street. The main building at 28 Commercial is now the Westwinds Condominium.

I can scarcely claim prescience about how profoundly the world was about to change, but when I was reading over my 2001 journal just now, I was struck by my description of an idyllic afternoon with Scott out at Wood End beach. “And all this with the poignancy of a September day to remind us — so achingly — that this cannot last; it is a fleeting, ephemeral moment to be treasured.” 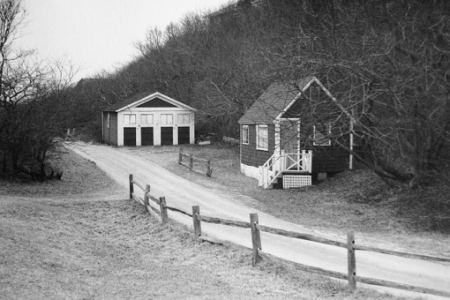