As a teacher, Charles W. Hawthorne is given much credit for Provincetown’s emergence as an art colony. As a landlord, Frank A. Days Jr. (1849-1937) isn’t given credit enough. The low-cost artist studios he and his successors furnished here and on Brewster Street ensured that many people were able to study and practice in Provincetown who otherwise could not have afforded to live here. Azorean by birth, Days arrived in Provincetown at the age of 18. In 1911, he bought a large parcel on Pearl Street and established a contracting and construction supply company — F. A. Days & Sons — with Frank A. Days Jr. (1877-1961) and Joseph A. Days. In 1914, Days constructed artists’ studios atop the lumber houses on the south side of the lumberyard and began renting them, first to Ross Moffett and Henry Sutter; soon thereafter to Hawthorne, Edwin Dickinson and Charles Kaeselau. These studios, renovated most recently in 2010, now form the historical core of the Fine Arts Work Center campus.

When Days acquired the property, the most prominent structure on the parcel was a two-story storehouse on Fishburn Court. (It still stands and it is still the most prominent structure at the center.) In her 1977 historical assessment, Josephine Del Deo said the building had quite probably been used by Stephen Cook, a shipowner whose wharf stood at the foot of Pearl Street, 381-383 Commercial Street. She surmised that it had been used to stow whaling gear, sails and the like. The storehouse, often referred to as a barn, can be seen below at the center of an advertising photograph from 1915. Its distinctive second-story loft doors are evident, as they are to this day. 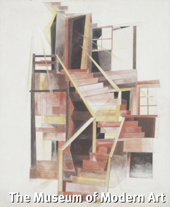 The studio spaces, whose high windows faced very close to true north, were constructed above lumber storage bins and were linked at the second-floor level by an exterior catwalk. The network of stairways and walkways inspired Charles Demuth, whose Stairs, Provincetown (1920), shown at right, is in the collection of the Museum of Modern Art. Though Days emerged by default as one of Provincetown’s great art patrons, Days probably had no more than a businessman’s interest in exploiting his real estate. Imagine getting money for inert storage space! “Rents were $50 for the season, or as far into the winter as an artist could last,” Ben Brooks wrote in an essay for Days Lumberyard Studios: Provincetown, 1914-1971 (1978). The Days did not make that easy. The 10 studios were uninsulated and all but unheated.

“The artists who worked there remember the noise at Days. … They remember Frank Days Jr., their gentleman landlord … coming upstairs to show them how to work the stoves when they arrived for their first summers. They remember those weak kerosene stoves he supplied. They had to lean forward to paint with one hand while reaching back to heat the other, on cold days …. And they remember running down the outdoor stairs to fetch hot water for bathing. Bathing in washtubs, or while standing by the sink, sponging off quickly by sections …. They remember the lone toilet. They remember the high north windows that would not open but gave exquisite clear light.”

And their names were legion. The photograph below, used as the cover to the Days Lumberyard Studios book, was taken by Maurice Berezov (1902-1989). It shows, from left: the artist Florence Grippe (b 1912); her husband, Peter Grippe (1912-2002); Samuel M. Kootz, proprietor of the Kootz Gallery at 481 Commercial Street, barely visible in the doorway; Fritz Bultman, before he moved into 8 Miller Hill Road; Hans Hofmann, before he moved into 76 Commercial Street; and the artist Perle Fine (1908-1988).

In 1951, Frank Jr. and Joseph Days sold the lumberyard to Joseph F. Oliver and Manuel V. Raymond, who kept the name as Frank A. Days & Sons. Raymond soon turned the operation over entirely to Oliver, who had worked aboard the trapboat Charlotte, a remnant of which is kept at the Pilgrim Monument and Provincetown Museum. Oliver jacked up the sagging studios, fixed the roof, insulated the walls, lowered the north windows (before the artists persuaded him to stop) and made them operable, and installed heating and toilets. He also raised the annual rents over time from $60 to $250.

The issue of affordability goes back decades. A kind of short-lived precursor to the Fine Arts Work Center was the Provincetown Academy of the Living Arts project, organized in 1965 by John D. Bell, Josiah H. Child, Munro G. Moore, Nicholas Wells, Nathan Malchman and others. Their goal, The Advocate said, was to create a “year-round art center where student and professional artists can study and perform.”

The poet Stanley Kunitz (32 Commercial Street) and the painter Jack Tworkov (30 Commercial Street) were among the members of PALA’s very distinguished advisory board. But not long thereafter, they became involved with another effort to house artists and boost the town economy. It was called the Fine Arts Work Center, and it was founded in 1968. Others who were active in its early years included Josephine Del Deo and Salvatore Del Deo, of 31 Atkins-Mayo Road; the poet Alan Dugan; the artist Philip Malicoat, of 312-320 Bradford Street; the artist Robert Motherwell, of 631 Commercial Street; the artist Myron Stout, and the collector Hudson D. Walker, of 645 Commercial Street, after whom the double-height gallery space on Pearl Street is named. His daughter Hatty Walker Fitts has long been a leading figure on the board of trustees.

The center’s first home, from 1968 to 1972, was at 135 Bradford Street. The Pearl Street property was purchased from Oliver in 1972. The center undertook its first major reconstruction project in 1988, designed by Michael Prodanou. At that time, a coal shed on the north side of the complex was transformed into a small assembly hall and named the Stanley Kunitz Common Room.

Under Hunter O’Hanian, who became executive director in 1997, the center began planning its second major construction and renovation project in 2004, also designed by Prodanou. Work began in September. Key to the project was recreating the U-shaped contiguity of the old Days complex by connecting the Common Room building with a structure on the south called the Trapshed Building. This took the form of a two-story addition, with a basement, that contained a 750-square-foot print shop on the first floor and two studios above, with about 375 square feet of space each. Margaret Murphy, who succeeded O’Hanian in 2007 as executive director, oversaw the next major project in 2009 and 2010, the reconstruction and renovation of the most historic portion of the complex: the original studios building. This was achieved by jacking up the whole second story and keeping it suspended while the old lumber bins down below were replaced with an actual, habitable, purpose-built office structure. Cape Associates was the contractor. The project cost was $1.4 million.

The old barn, across Joe Oliver Place from the Walker Gallery, was first rented to an artist in 1959. The painter Peter Busa, later of 600 Commercial Street, opened the Peter Busa School of Fine Arts on the second floor in 1959. He soon moved to Minneapolis to teach at the University of Minnesota and the space was taken over in 1961 and 1962 by the painters Robert Motherwell and Helen Frankenthaler, who were then married. A picture of the two of them posed in the open barn doors — she downstairs, he upstairs — is among the most indelible images of the Provincetown art colony. (I’d say “iconic,” but Times editors have beaten that overused word out of me.) For the 1978 Days Lumberyard Studios book, Motherwell wrote of the barn in a short memoir:

“In those years, the huge floors were undivided, and perfectly suited for the enormous formats of the paintings we were both accustomed to. The barn was beautiful to behold then, shingled, with arched barn doors on each floor (which I incorporated into the street side of present studio-house at 631 Commercial Street); windows on all sides, with the radiant summer light of Provincetown that rivals the Greek islands, because, I have always supposed, like them, Provincetown is on a narrow spit of land surrounded by the sea.” 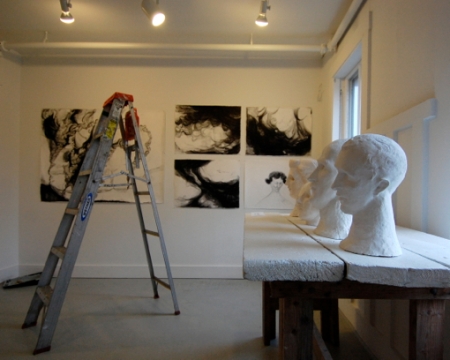 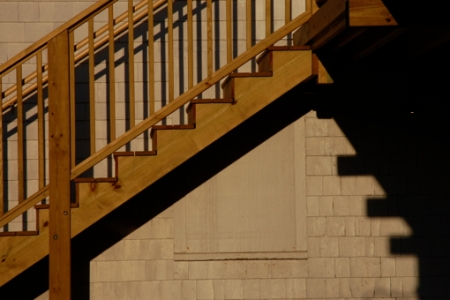 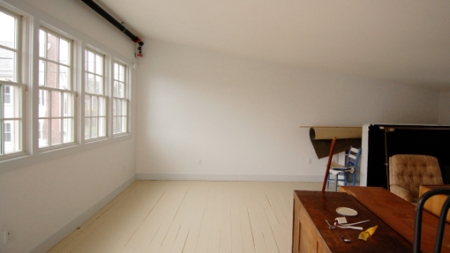 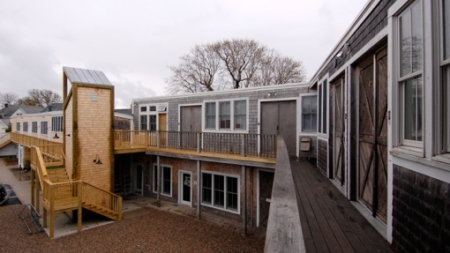 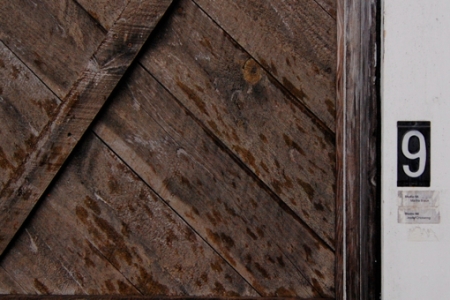 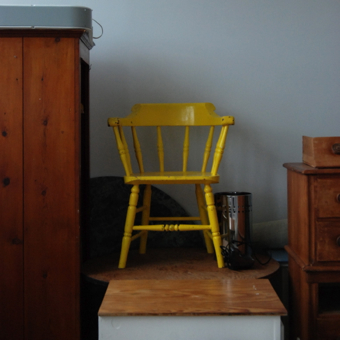 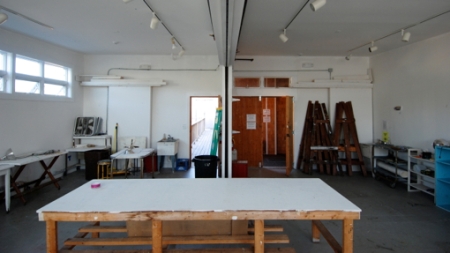 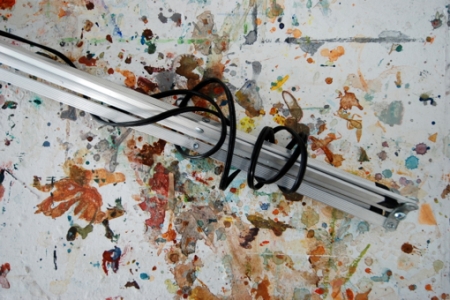 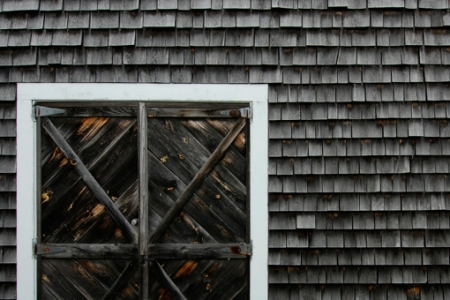 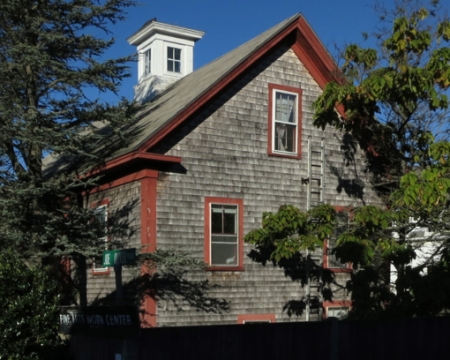 One thought on “24 Pearl Street”