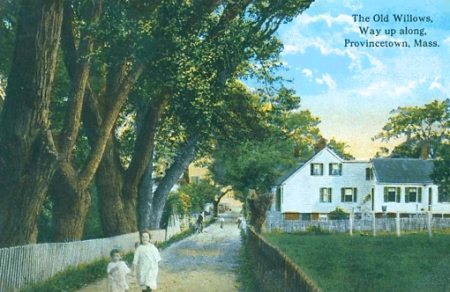 This house — a favored post card subject in the early 1900s when Nickerson Street was still a magnificent elm allée (never mind the caption that calls them willows) — was built by Elijah Doane on Long Point. Seemingly a picture-perfect slice of Americana, 3 Nickerson Street served briefly as a studio for Norman Rockwell.

Greg Craig, who owned the house from 2003 to 2010, noted in a comment: “The front portion of the house was a three-quarter Cape and the back portion was Doane’s store. Both sections were floated from Long Point and mounted on a brick foundation and sewn together by a rectangular section that made the front into a full Cape. The screened-in porch was added later.” The Siberian elm in the side yard, he said, is about 80 years old. It is visible in the photograph above.

Rockwell (1894-1978), was among several important artists associated with this house in the 1930s and ’40s. He had come to Provincetown around 1918 to study with Charles W. Hawthorne. In 1934, not long after the birth of his son Jarvis, “he returned, determined to spend a Winter here with his wife [Mary] and young son in the house which is now the home of Mr. and Mrs. Dan Foster on Nickerson Street,” The Advocate said, seemingly emphasizing the season through capitalization. (“Rockwell Painted and Studied Here, Latest Work Shows Genius for Detail,” The Provincetown Advocate, 29 January 1953.)

However, an account in Norman Rockwell: A Life, by Laura Claridge (2003), situates the trip more certainly in Summer.

“Site of the painter’s Cape Cod summer idyll almost 20 years earlier, it was a perfect place for swimming and sailing, both of which Mary loved. In a letter to her parents anticipating the trip, Mary earnestly explained that ‘[Provincetown] is an artists’ colony in the bargain which means it and the people will be quite unlike an ordinary summer place and thoroughly interesting.’

“No notes on the summer remain, but a later neighbor and friend of the Rockwells, Leah Schaeffer Goodfellow, recalls that both Fred Hildebrandt, Rockwell’s favorite male model, and Leah’s father, illustrator Mead Schaeffer, met with Rockwell during the vacation. They all were at Provincetown together.”

Greg Craig, who also owns and has substantially renovated the abutting 82 Commercial Street, said that the painter John Whorf also lived in this house in the 1930s and that his children played with the children of Chauncey and Mary Hackett next door, at 5 Nickerson Street.

The house was at one time owned by the Waugh family. Frederick Judd Waugh (1861-1940), paterfamilias, built the extraordinary studio across Nickerson, at 76 Commercial Street, that is better known for its association with Hans Hofmann. His children included Frederick Coulton Waugh (1896-1973), known as Coulton, and Gwyneth Waugh, who married the painter James Floyd Clymer (1893-1982). The Clymers’ daughter, Jeanne, took title to this property from the Waughs in 1945 and transferred it in turn to Daniel P. and Dorothy W. Foster, who were referred to in The Advocate article on Rockwell.

Three Nickerson changed hands frequently in recent decades: from Yolanda W. McPhee and Alain S. Whitman to Jack Bernard and Vincent P. Burke in 1978; from Bernard and Burke to Robert Deaton in 1987; from Deaton to Neal J. and M. Jean Hurwitz in 1992, for $227,500; from the Hurwitzes to Craig in 2003 for $791,000; and from Craig to Jane Conway Barber and Linda L. Rohler of Breckenridge, Colo., in 2010, for $1.255 million. Barber’s father, William E. Conway, is the founder and chairman emeritus of Fairmount Minerals Ltd. of Ohio, which supplies industrial-grade sand for the creation of a slurry used to drill gas wells.