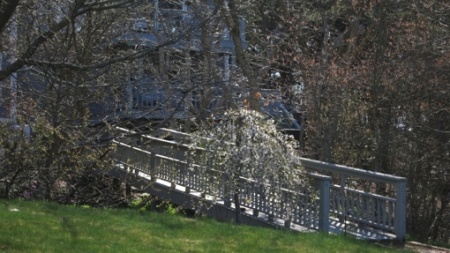 The Papetsas family, which has been in the construction business since the mid-’80s, are not just neighbors of the Cabrals but — as often happens in town — relatives, as well. They’ve owned this property since 1990, which is when their 2,800-square-foot house was built, suggesting strongly that it, too, is a Papetsas project. Thadd D. Papetsas (b 1955), carpenter and paterfamilias, is the son of John “Jack” Papetsas (1930-2009), originally of New Jersey, and Patricia (Cabral) Papetsas, his first [?] wife.

Thadd married Julie Sapia (b 1962), of Essex, Conn. She cofounded the design and construction business, and now serves as its bookkeeper and designer. Their son, Thadd D. “Dimitri” Papetsas Jr. (b 1988), who also lives here, works with his father as a builder. Their daughter, Julianne Papetsas, who holds a master’s degree from Boston College, specializes in computerized renderings and design. She also teaches at the Newman School in Boston. More to the point of Building Provincetown, Julianne is the author of the novel Seraphine, A Provincetown Story (2011), a novel that opens in 1942 and charts the dramatic changes in town life as they are experienced by an old-time handliner named Seraphine. As Papetsas says in her introduction, the account is drawn in part from stories told by her great uncle and great aunt, Robert and Yvonne Cabral, though in the form of invented characters. The fisherman on the cover, however, was quite real. He was her great-great-grandather and his name was Taves. Seraphine Taves.