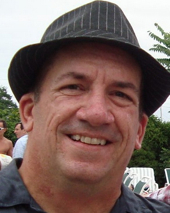 A better person to speak about 40 Nelson Avenue than me is Stephen Milkewicz (b 1956), a longtime disc jockey on WOMR-FM and a member of the town’s Historical Commission. He and his partner, Ronald A. Schleimer, moved to Nelson Avenue in 1985 from 26 Bradford Street, which they had operated as the Lamplighter Guest House and Cottage.

“We decided to sell the Lamplighter when Ron’s teenage son Jason decided to come and live with us and go to Provincetown High,” Milkewicz told me in 2013. “Not much was on the market at that time. However, there was a ranch house across the highway, near Nelson’s horse farm. We only knew of the horses there, but were surprised to find a suburban family neighborhood in the woods next to the Seashore.”

Forty Nelson Avenue was built in the ’70s by a Provincetown policeman, Sgt. Souza. We were the third owners. The house was in need of T.L.C. It had no front stairs to get to the front door. Like 26 Bradford Street, it was on a hill but faced north, with a view of a sand dune and the surrounding woods.

It had three bedrooms, one bath. The large living room had a fireplace and a picture window with the view. It had a full walk-out basement with a one-car garage (In Provincetown!) In the back was a huge deck facing south, with a view of a wooded area sloping down to a wetland and Route 6.

We figured that this would be a good house and neighborhood for Jason to grow up in. The price was very low, even back then.

When we looked at the house, there were three feet of snow on the ground. When we bought it and the snow melted, we found out why the price was so low: Nelson Avenue was never paved! There was no home delivery of mail. And the landscape around the house was filled with everything from old carpeting to broken masonry, glass, old wood, etc.

Ron got the town to blacktop Nelson Avenue and he got the Post Office to include the street in home mail delivery. We were the only gays in the neighborhood, but the neighbors warmed up to a Provincetown high schooler and his two Dads.

After five years, Jason graduated high school and moved back to New Jersey for a job. Shortly thereafter, Ron was told he had six months before he would die from AIDS.

He died in January 1990 at 40 Nelson Avenue. Provincetown lost so many. But the people of Provincetown really came together during that dark time of town history. Every single Nelson Avenue family helped Ron and me.

I stayed at 40 Nelson Avenue for another five years until I heard of plans to build apartment houses behind me and to replace the horse ranch with another housing development. I sold the house. Forty Nelson was expanded with a second story. I’m sure the view is fabulous. It was our intention to do the same.