On Miller Hill, Charles W. Hawthorne built a studio that looked like a barn. On Pearl Street, he turned a barn into a studio. (As it appeared in 2006, above, and after reconstruction, below.) His legacy here was continued through the ’90s by his students Edwin “Dick” Dickinson (1891-1978) and Henry Hensche (1899-1992), then by Hensche’s student, Lois Griffel (Streib) (b 1946), of 22 Brewster Street, who ran this as the Cape Cod School of Art. The most important association is between this property and Dickinson, whose View From 46 Pearl Street (1933) is shown above. (Hawthorne is identified most strongly with 25 Miller Hill Road, Hensche with 2-4 Hensche Lane.) 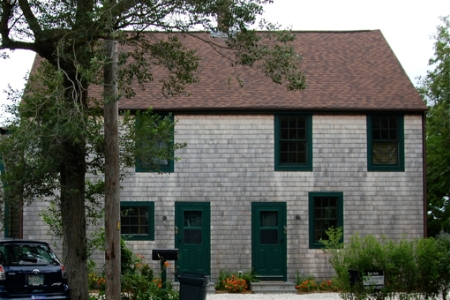 “It was at 46 Pearl Street that he painted three major and very large paintings which were to make his early reputation,” his daughter, Helen Dickinson, wrote in Edwin Dickinson in Provincetown, 1912-1937 (2007).

But first, about that barn. It belonged neither to Hawthorne nor to Dickinson, but to Josiah L. “Cy” Young (±1862-1950), a teamster and chauffeur and shop owner, who was known as the man who gave President Theodore Roosevelt a ride to the Pilgrim Monument on the occasion of the cornerstone laying in 1907. Young drove one of the horse-drawn “accommodations,” an only-in-Provincetown vehicle that was a cross between an omnibus and a hay wagon, which made their up-along and down-along, board and discharging passengers at an unhurried pace. He was also one of the first drivers — if not the first — to switch over to a motor-powered accommodation.

Cy Young was also proprietor of a store in town whose sign declared “Antique Shop” during the summer season and “Junk Shop” during the rest of the year, when the tourists were gone and there was no one around to fool. 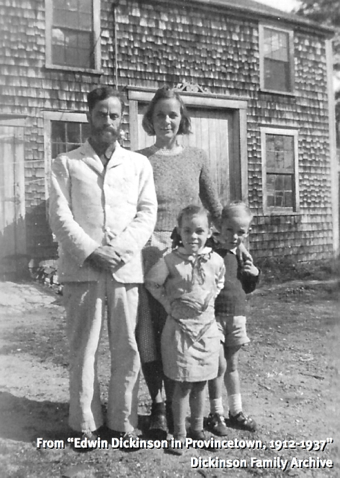 Young purchased properties along Pearl Street in 1898 and 1915. While Dickinson was his tenant, Young accommodated him by moving a small gambrel-roofed house snug up against the barn as a home for Dickinson’s sister, Antoinette “Tibi” Dickinson, and her husband, Henry Van Sickle.

Dickinson moved here in 1920 from the Days studios down the road at 24 Pearl Street and remained until 1937. With him were his wife, Pat (Foley) Dickinson, and their children Helen (b 1931) and Constant. Pat’s sister, Edith (Foley) Shay, was the co-author of Down Cape Cod with Katharine Dos Passos, of 517 Commercial.

At Pearl Street, as his daughter noted, Dickinson painted An Anniversary (1920-1921), The Cello Player (1925-1926) and The Fossil Hunters (1926-1928), a monumental canvas extending eight by six feet. “My father was unusual among painters of the ’20s in producing such large works,” Helen Dickinson wrote, “and these three paintings helped make his name for years to come.”

Two years after the Dickinson family decamped, in 1939, Young sold the property to Hensche, who had reconstituted Hawthorne’s Cape Cod School of Art in 1930 as the Cape School of Art. He dropped the word “Cod” from the school name, perhaps out of a sense of modesty or perhaps to avoid litigation with Hawthorne’s heirs. Almost 30 years into it, he was described by Frank Crotty of The Worcester Sunday Telegram as “a vigorous voice in the battle for representational art.” (“Henry Hensche Carries on Tradition of Hawthorne in His School of Art,” The Provincetown Advocate, 6 November 1958.) 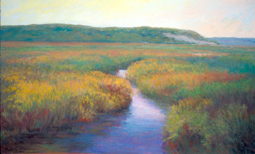 Lois Griffel, an alumna of the Art Students League and a student of Hensche’s who had been living in Provincetown since 1975, took over the school in 1985 as director. “I have been determined to uphold its long tradition of painting color and light,” she wrote on her Web site, Lois Griffel: Painting the Impressionist Landscape. “I believe that Impressionism is not only a precious tradition, but that it has been universally embraced in all contemporary realist painting today.” The school, however, was hard hit by the increase in lodging expense and the scarcity of parking space, she said. It took what Griffel called a “nosedive” in 2000, after which she announced plans to demolish the barn, redevelop the property residentially and move the school elsewhere. (Mary Ann Bragg, “Another Historic Studio to be Demolished,” The Provincetown Banner, 14 February 2002.)

It certainly looked as if the barn were about to fall down of its own accord. But ultimately, rather than wrecking it, Griffel and her husband, Harlan J. “Hal” Streib (b 1944), sold the property in 2005 to Paul M. Richardson, the owner of 42 Pearl Street. Richardson received approval from the Historic District Commission to renovate the barn with no increase in height and size; add two new windows to the main facade; renovate the adjacent cottage and restore its gambrel roof, expanding it to fill the narrow space between the buildings. (Minutes of the meeting, 4 January 2006.) The property is now a three-unit condominium. 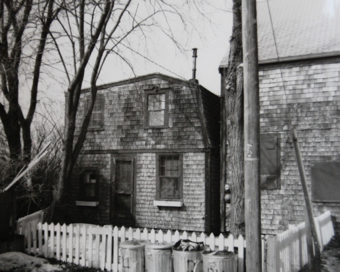 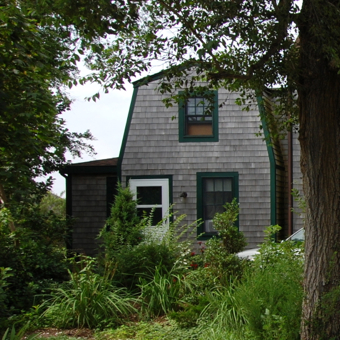