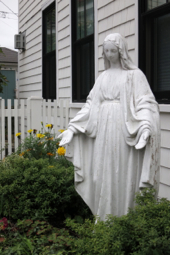 Two noble old out buildings complement this early 19th-century house. Caroline Ruth MacFarlane (b 1895) — “whose skill as a cook built the fame of Harbor Lunch,” The Provincetown Advocate said — purchased this property in 1934 from Grace Ellen McInnis of Washington. In 1940, Caroline married Joseph DeCosta (b ±1894), who was the co-owner of Harbor Lunch, 279 Commercial Street. She did a bit of cooking at the Viking Restaurant, 269-271 Commercial, which her son Harold W. MacFarlane opened in 1955. (For reasons why a Provincetown dining spot would commemorate the Vikings, of all people, please see 7 Cottage Street.) Members of the Order of the Eastern Star fraternal organization also enjoyed repasts prepared by Mrs. DeCosta.