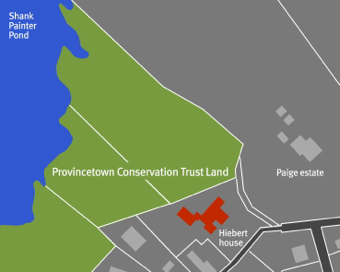 Ruth E. Hiebert (1922-2004) — benefactor, advocate, businesswoman and occasional lightning rod — started her life larger than life as the only child of Provincetown’s most famous physician, Dr. Daniel Hiebert and his wife, Emily L. Hiebert. She spent her final years here, in a large home she’d built for herself in the mid-1990s. Hiebert graduated from Provincetown High School and continued her studies at Tufts University, from which she received a bachelor’s degree in 1944. During World War II, she met a young lawyer named Maurice E. Fitzgerald (d 1969), who was serving in the Navy, when his ship visited Provincetown. They were to become lifetime companions.

Hiebert managed Captain Jack’s Wharf, 73A Commercial Street, and eventually purchased it. She was closely involved with the Provincetown Center for Coastal Studies from its earliest years and it is in her honor that the Hiebert Marine Laboratory at 5 Holway Avenue was named. 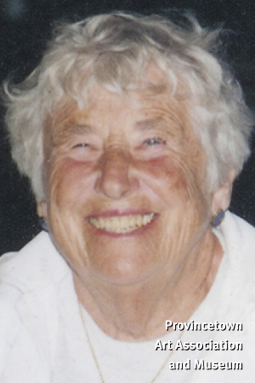 She was a founder of the Provincetown Conservation Trust, to which she gave a 3.2-acre tract of wetland and quaking bog in 1992, on the edge of Shank Painter Pond. She served on the Zoning Board of Appeals and on the boards of the Pilgrim Monument and Provincetown Museum and the Provincetown Art Association and Museum. (“Ruth Hiebert, 81,” The Provincetown Banner, 26 February 2004.) After many years at 71 Commercial Street (now the Dinghy Dock), Hiebert began building a new home for herself at the end of Pleasant Street, on land that had been in her family since 1937. Paradoxically, however, work on the house was temporarily halted in late 1995 when the Conservation Commission found that the construction had caused damage to the wetlands around Shank Painter Pond. (Timothy Burton, “Report Details Wetlands Infractions at Hiebert House,” The Provincetown Banner, 4 January 1996.)