The “Old White Oak” — built of that wood, harvested from nearby hillsides when one still could harvest lumber at the Cape end — was Provincetown’s second church. It was constructed in 1773 and dedicated on 20 February 1774. At the time, just before the Revolution, the Orthodox Christianity of the Puritans and Pilgrims was the established religion of the colony, and as such, the construction of the meeting house was a municipal endeavor. The call to the Rev. Samuel Parker was made, in fact, at a Town Meeting in December 1773. Parker was promised an annual salary of £67.13s.4d “to settel in sed town, and preach ye gospel to ye inhabitants.”

Parker, a 32-year-old Harvard graduate, was also promised that the town would “give untoe him the frame of hys house and to build haff of it” and throw in a “meddo to keep two cows in.” Naturally, he accepted the call. Not that the Old White Oak was without its complications, most notably its long pews, which were hinged so that the seats could be raised out of the way during prayer. “It was the delight of the boys in the galleriess, despite the menace of tything-men armed with long poles, to throw the seats down with a bang that startled the congregation,” Judge James Hughes Hopkins wrote many years later. Eventually, town voters resolved to nail the pews down.

Whatever Parker’s abilities as a preacher, he could not counteract the growing attraction of Methodism to the churchgoers of Provincetown, nor do much — in the post-Revolutionary period — to tamp down their resentment of the residual minister’s tax that was assessed by the town to support an institution with which they were no longer affiliated, Nancy W. Paine Smith wrote in The Provincetown Book. The Rev. Nathaniel Stone, Parker’s successor, did even more damage to the failing cause through his irascibility and belligerence. By 1830, Smith wrote, “All his hearers had deserted him, the meeting house was closed and the historic identity of the town and parish was ended forever.”

To judge from A Map of the Extremity of Cape Cod Including the Townships of Provincetown and Truro (1835), the meeting house was used by a Presbyterian congregation some time between its closing under Stone and its dismantling in 1843. Lumber from the Old White Oak was used to construct the First Congregational Church at 256-258 Commercial Street, and so may still exist in some places around the Saki restaurant.

Old White Oak did not have a Mozart Avenue address, of course. But its location, shown below in a comparison between the 1835 map and an 1880 street atlas of Barnstable County, indicates that it was close to the northwest corner of Mozart and Prince Street. ¶ Posted 2013-05-12 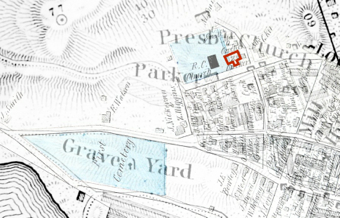 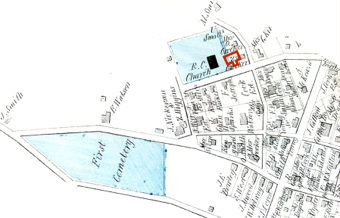