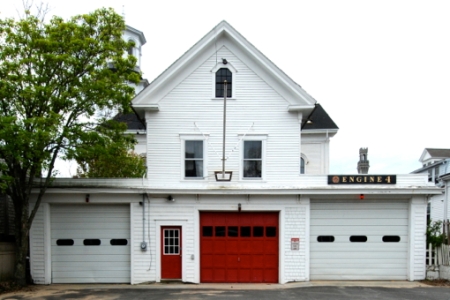 Always a fire house, this structure has been known by several designations since its construction in 1888: Steamer-Hose Company 3, Pumper Company 3 and Engine Company 4. It has been the home of at least two celebrated fire trucks: an Amoskeag steamer made by the Manchester Locomotive Works in New Hampshire in 1889 and a pumper truck made by American LaFrance in Elmira, N.Y., in 1936. The pumper, designated Engine 4, was decommissioned in 1976 but has been painstakingly rebuilt in recent years and is now a top star of any parade in which it appears.

The steamer was known as the J. D. Hilliard, in honor of John D. Hilliard, a Provincetown fire chief and the one-time owner of Hilliard’s Wharf, 337-341 Commercial. It was not the water in the boiler that was used to fight fires. Rather, the boiler produced the power needed to operate a pump aboard the truck that drew water from hydrants and forced it through the fire hoses. The Hilliard remained in service until the 1920s.

Sivert J. Benson (±1895-1966), the founder of one of the insurance businesses that were amalgamated into Benson Young & Downs, 56 Howland Street, was the captain of this company in the 1930s. Presumably, there was no conflict between his income as an insurance agent and his duties as a firefighter. In either case, he wanted to get the flames extinguished as quickly as possible.

It was [is?] on the second floor of this building where regular meetings were [are?] held of the Board of Fire Engineers, the governing body of the Fire Department.

This is now the home of American LaFrance Engine 4, which served the department for 40 years as firefighting apparatus and now performs ceremonial functions. Pulled from abandonment in 2000, it was restored by a team of firemen including Paul Roderick (b 1963), of 37 Conwell Street [?]; Anthony Quirk; Mike Foster; and David and Kevin Ainsworth. After their many years of volunteer labor, Engine 4 returned to service in the 2009 Portuguese Festival parade. (Stephen Morris, “Vintage Provincetown Firetruck Gets New Life,” The Provincetown Banner/Wicked Local, 28 July 2009.) • Historic District Survey • Assessor’s Online Database ¶ Posted 2013-02-16