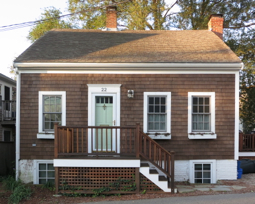 Among the older houses on Franklin Street, No. 22 was constructed in 1837. Until his death in 1950, at the age of 44, this was the home of Jackson R. Cabral, the son of Joseph and Philomena (Silva) Cabral, who had come to Provincetown from the Azores. Jackson married Margaret Enos. He worked as an engineer at the Cape Cod Cold Storage, 125 Commercial Street, where he was stricken by a heart ailment. He died in this house soon afterward.