To put it bluntly, Provincetown is awfully monochromatic. Until recent years, and the arrival in big numbers of seasonal workers from Jamaica on H-2B visas, the town’s much-celebrated diversity seemed to have existed in almost every way but racially. Yet there have always been notable exceptions to the preponderance of Europeans and Yankees; among them the Roach family of 24 Conwell Street. Douglas Bryan Roach (1909-1938), by far the best known family member, volunteered in his late 20s to join the fight against Fascism with the Abraham Lincoln Brigade in the Spanish Civil War. During the battle for Brunete in 1937, a piece of shrapnel tore a large wound in Roach’s shoulder from which he never fully recovered, though he managed to get back to the States. He died 13 July 1938 at Mount Sinai Hospital in New York from a pneumonia he couldn’t fight. Roach received hero’s funerals both in Harlem and here in town, where he is buried with other family members.

The story of this remarkable family began in 1870, with the birth of Alexander Roach in Kingstown, on the Caribbean island of St. Vincent. At 17, Alexander left home to go whaling. “He came to Provincetown on a whaling vessel and resided here since,” his obituary in The Advocate said. “He nearly lost his life twice while whaling, by being cast away, thus causing him to give up whaling and try working on land.” (“Alexander Roach,” 7 July 1932.) In 1899, Roach purchased the Conwell Street property for $65 from the Phinney family. He married Margaret Bryant (±1881-1945) of Beaufort, S.C., who had come to Provincetown in the early 1900s. (“Mrs. Margaret Roach,” The Advocate, 21 November 1945.) Roach worked as a foreman for several sand-loading companies in town before going into business for himself in 1910.

The couple had five children. First was John Nathan Roach (b 1907), who was called Nathan. According to the author Peter Manso, Nathan Roach also fought in Spain. He came back blind. It was Nathan who rented the cottages that sit in a small cluster on Conwell Street. (The going rate for a two-room cottage in 1962 was $360 — for the entire season.) In 1960, Nathan also sought, with Maurice H. Lopes of 28 Alden, to establish a trailer park on this property. That same year, he rented one of his cottages to an auspicious trio: Henry Geldzahler, the art historian and curator; Peter Manso, who would one day write Ptown: Art, Sex and Money on the Outer Cape; and the painter Philip Tarlow.

Nathan’s grandson, James E. Roach, currently serves on the Truro Police Department. In 2012, he was promoted to sergeant.

Next in line came Douglas, who cut a high profile at an early age, witness his high school nickname of “Barb.” He is listed in the 1930 federal census as “Douglass,” suggesting strongly that he is a namesake of Frederick Douglass. Though most other contemporary accounts — and his tombstone — spell his name conventionally, Harriet Jerusha Korim used the alternate spelling in an article she wrote for Volume 11 of Provincetown Arts in 1995, which may have been the most comprehensive account of his life to date.

Roach graduated from Provincetown High School in 1928, then attended the Massachusetts Agricultural College in Amherst, known since 1947 as the University of Massachusetts. (It’s worth wondering how many other students of color were enrolled at UMass in 1929.) Back here in the early ’30s, he managed an amateur football team called the Provincetown Steamrollers. He also wrestled as an amateur, Korim wrote, and was on at least one exhibition bill at Town Hall. But far more serious political convictions were taking root as the Depression continued relentlessly. Roach joined the International Seamen’s Union and then, in 1932, the Communist Party of the U.S.A. By 1936, he was serving as secretary of the Communists’ Provincetown Unit.

In that role, he was cast into controversy as the 1936 election approached, when the Board of Selectmen refused to make Town Hall available for a Communist-sponsored political rally. In an open letter to the Morris-Light Post of the American Legion, Roach pointed out that the Constitution guaranteed freedom of speech and the freedom of the people to assemble and to petition government for a redress of grievances. “Who violates the Constitution? The Selectmen of Provincetown; not the Communist Party!”

More critical, and deadly battles lay ahead. Roach was among the black Americans drawn to the cause of the Second Spanish Republic as it tried to survive the attacks of Nationalist insurgents, spearheaded by Francisco Franco and supported by the Nazi government of Germany and the Fascist government of Italy. “It is bad enough for white people to live under Fascism,” an Africa-American volunteer explained many years later, as quoted by Korim. “Negroes couldn’t live under it. They would be wiped out.” Roach set off for Europe in January 1937 aboard the Paris.

“Doug was proud of his race,” Sol Fellman, a comrade in arms, wrote in a contemporary panegyric. (The friendship between Sharp and Fellman was the subject of an installment in the PBS series History Detectives, “Spanish Civil War Eulogy.”) “He felt deeply the oppression under which it struggles, and gladly gave his aid to help free it. He knew that the cause of the Spanish people was the cause of his own people, the cause of all the oppressed races of the world. He spoke many times of his plans to work among the American Negroes when he got back, how he was really beginning to see the tremendous role they must play in the fight to preserve democracy in America. He bitterly repented not having done more when he was home.”

Roach saw the Spanish Civil War in terms even larger than that, as he explained in a letter home. (“Douglas Roach Tells of War in Spain,” The Advocate, 30 September 1937.)

“I believe the fight for democracy in Spain is connected with the fight against reaction everywhere, against aggressive countries such as Italy, Germany and Japan, who are dragging the world into another world war.

“I hope that the people of Provincetown will defend Americanism in this country as bravely as the Spanish people are defending their democratic rights: a government of their own choice, freedom of speech, freedom of assembly and freedom of worship. I hope that we will not allow our American traditions of liberty and justice to be distorted by reactionaries who preach Americanism and practice the opposite.”

Roach was seriously injured in Brunete by flying shrapnel. He was hospitalized in Madrid, which was then still controlled by the Republicans, or Loyalists; that having been the whole point of the Brunete defense: to keep Franco’s forces from reaching Madrid. “He couldn’t get over the way his visitors would be surprised to note that while his skin was coal black, the soles of his feet were almost white,” Fellman wrote in his eulogy. “They would study this phenomenon when they thought he was asleep, and he never tired of pretending he was asleep, while slyly watching them.” 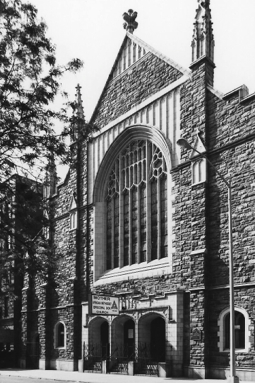 Ticker-tape didn’t greet him upon returning to the States. State Department investigators did, though. American nationals were not supposed to be fighting on behalf of foreign governments in conflicts where the United States was officially neutral. He was at last permitted to come home to the Cape, though he then returned to New York to work for the Seaman’s Union. He died there and was given his first funeral at the celebrated Mother A.M.E. Zion Church on West 137th Street, the oldest black church in New York, led by the Rev. Benjamin C. Robeson (Paul Robeson’s brother). Then his body was returned to Provincetown for a second funeral, at the Congegational Church of the Pilgrims, 256-258 Commercial, next to Town Hall. Then, Korim concluded, “He was buried with military honors at the edge of the cemetery in back of the house where he had been born 29 years before.”

Fourth in the line came Edward Stillman Roach (1913-1990), who did not shy from battling for racial equality in Provincetown at a time in when many otherwise thoughtful, sensitive citizens were blind to even the most naked expressions of prejudice. Specifically, he took it upon himself in 1949 to criticize a minstrel show — blackface, in less polite terms — that had been performed at Provincetown High School. Minstrel shows had been a staple of local entertainment for decades, so it could not have been easy for Roach to write an open letter to the town, through the pages of The Advocate. But he did so with grace and passion:

“Surely in presenting this type of entertainment, the faculty of the high school intended no harm.

“Nonetheless, tremendous harm was committed. This stereotyped portrayal of the Negro in the role of a knife-wielding, gaudy, boisterous and clowning type is not only a vicious, incorrect interpretation of the Negro people, but a condemnation that only serves to feed the flames of race hatred and misunderstanding.

“Again one of the most insidious and harmful remarks in the show was the naive attempt to revive the old Nazi slander, linking the Negro with apes. Could it be possible that our educators hold such views, rather than the scientific one that all men are of one species, and the Christian view that all men are brothers?”

Roach was equally eloquent two weeks later in defending his objection against a chorus of townspeople who were wondering what all the fuss was about.

“Have any of these fair-minded citizens who refer to me as over-sensitive ever been refused the right to eat in a restaurant? or barred from a hotel? Have they ever suffered any of the many forms of outright discrimination perpetrated against the Negro people? Undoubtedly not; otherwise they wouldn’t find it so difficult to see clearly my point of view: simply that minstrel shows don’t help in developing and molding a better life for the Negro, but to the contrary, by their gross misrepresentation help to formulate unhealthy ideas detrimental to the Negro status and well-being.” 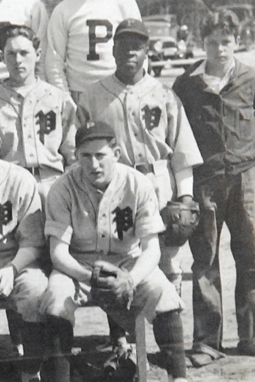 The “baby” of the family was Alexander Sherman Roach (1917-1997), who played as a high school student for the P.H.S. football, baseball and basketball teams. He went on to fight for America in World War II.

The remarkable history of the occupants of 24 Conwell Street doesn’t end with this family. The artist Arthur Silz (d 1956) conducted school at 24 Conwell for at least one summer, in 1954. Two years later, he was killed near San Cristóbal de las Casas in the mountainous Chiapas region of Mexico by indigenous Mayans. Silz had wandered way too far off the beaten path and ended up confronted by villagers who had never seen anything like him. In their language, Tzotzil, they asked him who he was. Then they asked again in Spanish. When he could not answer in either language, they concluded he was a devil and, necessarily, killed him — because of the color of his skin.