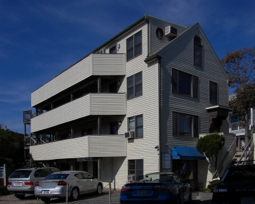 The triple-decker, clapboard-sided porches appended to this house might charitably be described as giving the structure something of the appearance of an ocean liner, or less charitably as looking like gun ports in a vertical bunker. Hannah’s Headlines, a salon established in 1986 [?] and run by Hannah McCormick and Sandra Alsante, occupies space on the ground floor.

This nine-unit condo also houses the headquarters of the Provincetown Business Guild, composed — by its own description — of “all types of businesses who are directly and indirectly affected by tourism to Provincetown and who are committed to the economic and cultural development of G.L.B.T. tourism in this one-of-a-kind destination.” 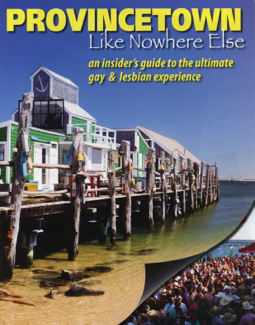 Explicitly promoting the town as a gay and lesbian resort directly to gay and lesbian audiences was not something that the Chamber of Commerce was prepared to do in 1978, Sandra L. Faiman-Silva wrote in The Courage to Connect: Sexuality, Citizenship and Community in Provincetown (page 117).

As a consequence, the nucleus of the Provincetown Business Guild was formed by Arpina and Skip Stanton, the owners of the Coat of Arms, 7 Johnson Street (now the White Porch Inn); George W. Littrell Jr., the owner of George’s Inn, 9 Court Street (now part of the Brass Key Guesthouse complex); Alton J. “Al” Stilson, the owner of the Ranch Guest Lodge, 198 Commercial Street (now the Crew’s Quarters); and Dexter S. Ross, the owner of Dexter’s Inn, 6 Conwell Street (now the Salt House Inn). [Others?] Silva noted that Arpina Stanton, a straight woman, “was drawn to the community for its openness and tolerance.”

The officers of the organization as of 2013 are Richard McNally of Security First Mortgage, president; Kevin O’Shea of the Salt House Inn, vice president; Todd Wagar of Provincetown Bookkeeping, treasurer; and Cathy Nagorski of the Sage Inn and Lounge, 336 Commercial Street, secretary.