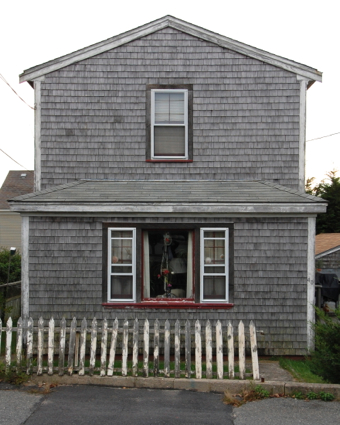 Function, meet form. Until recently, at least, No. 40 had one of the plainest and most Spartan facades on Franklin Street; a simple house that performed its sheltering mission modestly. Whom it sheltered were members of the extended Corea family. John Francis Corea (±1916-1962), a Provincetown native, was the son of John and Mary M. (Mayo) Corea. After graduating from P.H.S. in 1933, he joined the Coast Guard and served through World War II, seeing duty in the Pacific Theater, including at Guadalcanal. He then fished with his father and later worked as a mechanic at Duarte Motors, 132 Bradford Street. 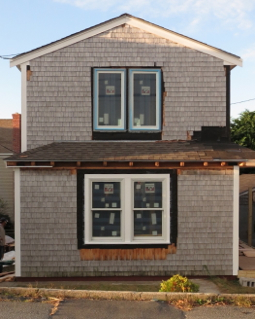 He married Flora M. Littlefield (b 1918), who worked as a chambermaid, and they had three children: Lillian Corea, who became a nurse; Linda (Corea) Rogers; and John Littlefield Corea (b 1957), who became a repairman and later worked at Nelson’s Stable. Flora was only 44 at the time of her husband’s death and I believe she was remarried [?], to Manuel Henrique (b 1921), a carpenter who’s shown at this address in 1981. In the early 1960s, this was also home to Francis “Bottles” Souza (b ±1923). Linda Rogers sold the property in 2012 to Patricia Fitzmaurice of Wakefield, R.I. The subsequent renovation, while respectful and understated, has naturally changed the character of the house. That single window on the second-floor street facade seemed to speak of people who were too busy working to spend time gazing outside; awake before the sun rose and back to bed exhausted. In a gesture as simple as replacing that single window with two windows side by side, a small token of history was lost. • Assessor’s Online Database ¶ Posted 2012-12-29