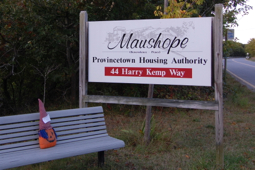 It’s a funny thing about government-sponsored affordable housing projects. They are seldom popular when begun. But eventually — for want of many alternatives, among other reasons — they wind up with long waiting lists. Maushope, named for a guardian deity of the Wampanoag people, is a 24-unit group residence for people 60 and older and for the disabled, whose rent is typically capped at 30 percent of their incomes.

Developed and maintained by the Provincetown Housing Authority, it opened in 1986, survived a devastating fire in 1996 that claimed the lives of Meara Cabral and Clifford Sylvia, and wound up on its 25th anniversary with an applicant list of about 40 people, who might expect to wait up to 10 years to get in. (It is also, incidentally, one of the few buildings in Provincetown with an elevator.) • Assessor’s Online Database ¶ Posted 2013-01-20