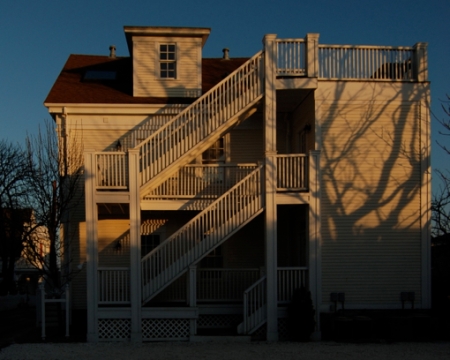 Park H. Davis, co-author of The Complete Idiot’s Guide to Running a Bed and Breakfast (Alpha, 2001), owned the seven-room Benchmark Inn from 1996 to 2011, during which time it also encompassed an annex, the Benchmark Central, at 8 Dyer Street.

Davis’s 1997 renovation won the notice of Boston Spirit, which listed the Benchmark among its five top Provincetown choices. (John O’Connell, “The Best Rooms in Town,” Boston Spirit, 4 August 2011.) O’Connell praised the décor for its clean lines and absence of clutter, inspired by Davis’s “passion for ocean liners.” Davis himself described the aesthetic as California Clean. “With the absence of dressers and drawer units, captain’s beds seem to float in midair, their drawers tucked out of sightlines,” O’Donnell continued. “Warm neutral colors and an absence of artwork maximize the sense of space and don’t impede the surprising views of the bay.” Both the property and the operating license were transferred in 2011 to Daniel Luethi of Switzerland, doing business as Edelweiss Holdings.