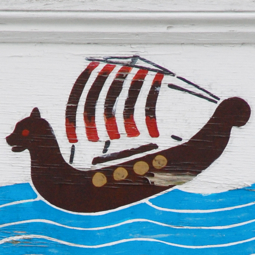 There is no longer a sign out front announcing its unusual name, but the Norse Wall House has had a firm claim on Provincetown’s imagination for more than a century, so 7 Cottage Street is probably not destined to be called anything else.

What — and where — is this famous Norse Wall? Actually, no one has seen it since 1853, when excavation began on the cellar of No. 7, which was being built at the site of an abandoned salt works on what used to be Chip Hill. “At the depth of five feet a wall of masonry was found about three feet in height and two feet wide at the base,” Herman A. Jennings wrote in Provincetown or, Odds and Ends From the Tip End (1890). 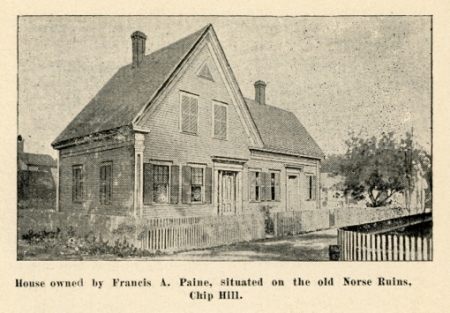 These stones were nicely laid in shell-lime mortar, and after clearing off a space from the bottom of the wall, there was found a hard earthen floor composed of peat, clay and fine white sand, hammered and pounded together, making a hard level floor. Upon digging further, there was found the remains of a fireplace, where the stones of which it was made were partially calcined by the fire; near by was a small collection of partially decomposed bones mostly of sea fowl. … The stones of which this is made were evidently brought from some foreign country, as none are to be found on the Cape, nor in any place in this Country.

“The theory has been advanced by scientific men,” Jennings continued, “that this was the camping-place of Old Thorwald and his crew, while repairing his ship, and it seems with a great deal of plausibility.”

“Old Thorwald,” a/k/a Thorvald Ericsson, was a son of Eric the Red, the Norse chieftain who discovered Greenland, and a brother of Leif Ericsson, widely credited as the first European to encounter America — which he called Vinland — around the year 1000. Thorvald set out in about 1004 to explore Vinland further. A severe squall drove his ship ashore on a cape, breaking the keel as it did so. Thorvald and his crew were forced to make camp and repair the keel. From this misadventure, their landing place was given the name Kjalarnes, or keel-cape.

Kjalarnes was identified as Cape Cod in Antiquitates Americanae, by the Danish archaeologist Karl Christian Rafn, published in Copenhagen in 1837. The idea was embraced by Joshua Toulmin Smith in his book, The Northmen in New England, or America in the 10th Century, published in Boston in 1839. Besides parochial pride — “New England may be said to have become classic ground, since the discoveries of the Northmen have become generally known” — Smith also sounded the more dissonant note of racial and ethnic superiority:

If … the discoveries and voyages of Columbus have ever been esteemed objects of interest and importance, the discoveries and voyages of the Northmen, five centuries previously, should certainly be esteemed of at least equal interest and importance. That interest should be increased by the fact that latter discovered and explored the very same shores where now a race of Anglo-Saxon blood has fixed its habitation, and made once savage and barbarous America assume an important station in the history of the world.

In his essays on Cape Cod, Henry David Thoreau took skeptical note of the supposition that Cape Cod and “‘Kialarnes’ or Keel-Cape” were one and the same. “Though we have great respect for them as skillful and adventurous navigators, we must for the present remain in doubt about what capes they did see,” he wrote in 1855. “We think that they were considerably further north.” As it turns out, Thoreau seems to have been right — again. The first archaeologically documented Norse settlement in North America would come to light in 1960. And it was indeed, considerably north: L’Anse aux Meadows at the northern tip of Newfoundland.

But it’s not at all surprising that the discovery of the wall under the foundations of 7 Cottage Street should have caused such excitement and speculation so soon after the publication of Antiquitates Americanae. And it’s quite understandable that Jennings should have perpetuated the idea in his Odds and Ends compendium, even though Rafn’s calculations were already being called into question by 1890. After all, if Provincetown could claim a visit by Thorwald more than six centuries before the Mayflower‘s arrival, Plymouth’s boasting would be forever silenced. Who would care where the Pilgrims landed? Those arrivistes! 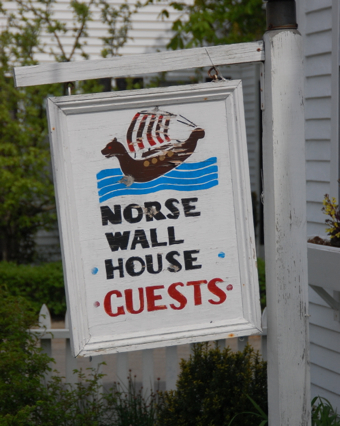 Annie Whitney McKennon (±1867-1945), the principal of the Governor Bradford School at 44 Bradford, ran the Norse Wall Cottage in the 1930s and 40s. In our own time, it was run most famously by E. Ruth Rogers (±1919-2004), who was also a co-owner of the Gifford House. During this period, the Norse Wall annex was established at 98 Commercial nearby. The property is now owned by Richard Golembeski, who also owns one of the units at 5 Cottage Street, which serves as the current Norse Wall annex.

One thought on “7 Cottage Street”