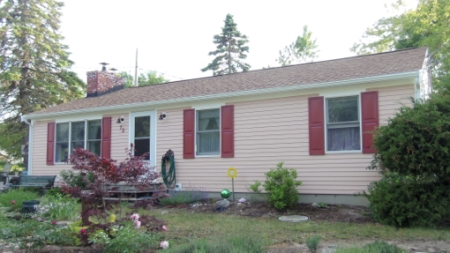 The last sinking of a fishing vessel in the Provincetown fleet with the loss of multiple lives occurred 1 May 1984 — nearly 30 years ago — when the Victory II, under the command of 28-year-old Capt. Kenneth Macara II, went down near Billingsgate Shoal after its net became entangled in an old mooring. The skipper and two other men perished. Captain Macara’s parents, Kenneth R. Macara (b 1931) and Ruth L. (Koontz) Macara (1930-2005), bought this property in 1966.

The older Kenneth Macara was a fisherman. Ruth Macara had worked at the Bonnie Doone Restaurant and the Provincetown Inn before having children. Joel Alan Macara (b 1961), Captain Macara’s brother, and Joel’s wife, Cheryl Lynn Macara (b 1963), now own this house, with Joel’s father. • Map • Assessor’s Online Database ¶ Updated 2013-07-02