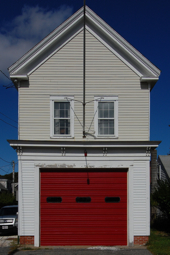 Engine Company 5, which is housed here, is the first responding unit to fires in the East End, from Howland Street to the Truro town line. It was summoned by five blasts on a siren atop Town Hall. The house was built in 1870 and has been known over the years by several designations, including Hose Company No. 1, Pumper Company No. 4 and Pumper Company No. 5. The latter change, from No. 4 to No. 5, occurred in 1957, when Arthur B. Silva (±1893-1962) was the captain. Silva — standing third from the left, in a white shirt — was the Town Harbormaster and Wharfinger at the time of his death. He had also been the Town Sealer of Weights and Measures, a fisherman and a car salesman.

Other officers of the company over time have included Warren Alexander (his service went back to the days when it was a hose company), John Alexander and, more recently, Lorne Russell.