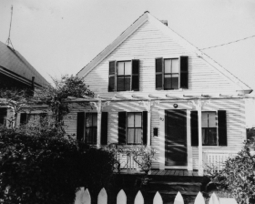 Who else would be next door to Mayo than Atkins? This was the home of Mary Emma Atkins (±1858-1934) and Anna W. Atkins (1870-1920), the daughters of the celebrated Capt. David H. Atkins of the U.S. Life-Saving Service, who perished on 30 November 1880 attempting to rescue crew members of the foundering sloop C. E. Trumbull. He is buried in the old Gifford Cemetery below a monument with a fouled anchor in deep relief. The Misses Atkins, along with their mother, Ellen (1837-1913), were credited by The Advocate with having been responsible in large measure “for the growth and popularity” of the East End. Following the death of Captain Atkins, the newspaper said, “the three ladies most hospitably cared for a growing number of summer visitors, making life for them so attractive that many became annual visitors, and some eventually permanent residents.” Among those who fell for the lure of the East End were Robert R. Smyers and Mary C. Smyers (±1930-2011) of Garrett Park, Md., who bought the Atkins cottage in 1965. It is still owned by their family. [A corrective comment appears below.] ¶ Updated 2013-07-25