Antoinette Dallett Turcas Throckmorton. Quite a moniker. And there was an ample personality behind the name, as the Metropolitan Opera learned to its distress on opening night 1947, when Throckmorton (d 1968), clad in ermine, puffed on a cigar in the grand tier bar, creating a field day for photographers and a sensation for the reading public. The Met censured the antic, which was front-page news in The New York Times, though no names were used. The chairman of the Met told The Times that “many protesting communications” had come in, and he agonized that people who had never set foot in the opera house “must wonder if these pictures reflect the character of the Metropolitan Opera and its normal audience.” Normal? For goodness sake, Throckmorton summered in Provincetown! And this was her house — from 1944 to 1956. She was followed here by the artist and teacher Mervin M. Jules (1912-1994).

Antoinette Dallet Turcas was the daughter of the artist Jules Turcas, who lived and worked on the West Side of Manhattan. In 1924, she married an engineer, John Wyckliffe Throckmorton, who would later hold a patent on a process for converting heavy oils into motor fuel. They were wed at St. Bartholomew’s Church, suggesting that the affair was fairly high society. She was living in Wilton, Conn., when she bought 613 Commercial from John F. Connell. Three years later, and newly divorced, she scandalized the Met. 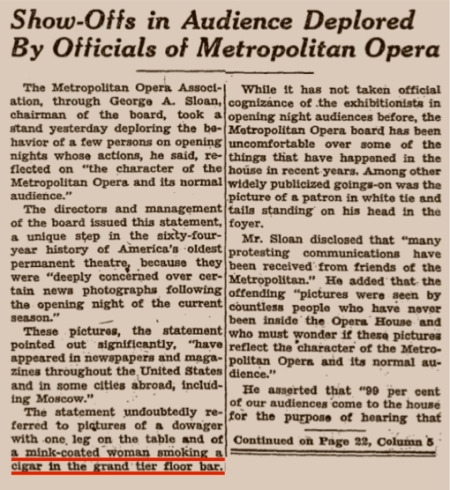 This was too good for the Broadway columnist Earl Wilson to ignore. About a month later, under the headline “Bumpkin on Broadway: Mad Soiree Thrown by Cigar-Smoking Matron,” he wrote: “Courteously removing a cigar from her kisser to say ‘hello,’ Mrs. Antoinette Throckmorton welcomed me to her mad soiree. Mrs. Throckmorton is the perfecto-puffer who scandalized stodgy folks at the Met opera opening. Now she’s as popular as Lana Turner and people crave to meet her. I went into a living room where three women were coughing and making faces over cigars.”

Jonathan Sinaiko, who grew up nearby, did not recall Throckmorton so much clad in ermine as in nothing at all. “She painted the house pink and walked around the house nude,” he told me. To judge from a few paid notices in The Advocate about the mischief caused by local miscreants, life could be as lively at No. 613 as it was at the grand tier bar on Broadway and 39th Street.

At the end of the summer of 1956, Throckmorton sold the house to Jules and his wife, Rita. A native of Baltimore, Jules was graduated from the Maryland Institute College of Art in 1934 and, the next year, had a work on exhibit at the Baltimore Museum of Art. Given the connections he was starting to make, it seems almost inevitable that his path would have brought him to Provincetown by and by. For instance, in 1937, he studied with Thomas Hart Benton at the Art Students League of New York; virtually a breeding ground for Provincetown artists, and not long after Peter Busa had studied with the same teacher. Even more importantly, Jules was given his first one-man show, in 1937, by none other than Hudson D. Walker, in Walker’s fairly new gallery at 38 East 57th Street in Manhattan. Walker described Jules’s social commentaries as “sombre in tone, powerfully conceived and executed.” (Biography on Rogallery.com.)

Jules headed the art department at Smith College and then at the City College of New York. His work is in the collections of the Metropolitan Museum of Art (another Met connection at No. 613), the Museum of Modern Art, the Art Institute of Chicago and the Museum of Fine Arts in Boston. (“Mervin M. Jules, 82, Artist and Educator,” The New York Times,” 5 August 1994.)