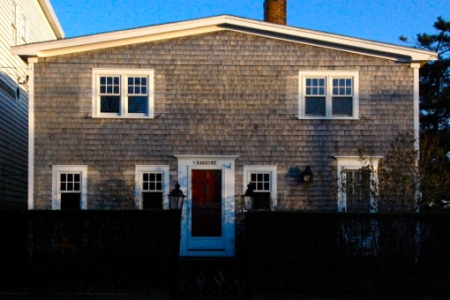 Harmony is not just a lovely name; though it is certainly that. It is a deliberate recall of the name of Lily Harmon (1912-1998), the artist who bought this property in 1956 and whose daughter, Jo Ann Hirshhorn, continues to own it. She had also given the name Harmony to what is now known as the Norman Mailer house, 627 Commercial, but brought the name with her when she moved here. Best known for her portraiture, Harmon “transcended physical description and expressed in a distinct painterly style the dignity and character of her subjects,” said an essay on the Web site of the Ernden Fine Art Gallery, which represents her work. Roberta Smith said Harmon’s work “usually followed a tradition of sympathetic portraiture personified by Raphael Soyer,” a Social Realist of the early 20th century who taught at the Art Students League. (Roberta Smith, “Lily Harmon, 85, Portraitist and Book Illustrator,” The New York Times, 14 February 1998.)

Lily Perlmutter was born in New Haven. She studied at the Yale School of Art, the Académie Colarossi in Paris and (where else?) at the Art Students League. She first came to Provincetown in 1929 to study with Henry Hensche. Among her subjects were Helen Frankenthaler and Mimi Gross, whose father, Chaim Gross, was a lifelong friend of Soyer. She took the name Harmon with her marriage in 1934 to Sidney Harmon, a movie and theater producer. In 1945, she married the prominent financier and art collector Joseph H. Hirshhorn (1899–1981), with whom she adopted two infant daughters. He was the founding donor and namesake of the Hirshhorn Museum and Sculpture Garden in Washington, and her work is well represented in the collection, although the museum opened 18 years after the couple divorced, in 1956. Her autobiography, Freehand, was published by Simon & Schuster in 1981. Title to the house was transferred formally to Jo Ann Hirshhorn in 2000.