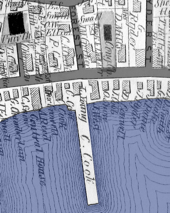 As early as 1838, Young’s Wharf was shown at the foot of what was once known as Forest Street (now Gosnold). It was Charley Cook’s Wharf under Capt. Charles Cook. By the late 1930s, it was known as the Art Colony Wharf, over which Heinrich Pfeiffer (d 1957) presided. On the wharf stood the Artists Theatre, which Pfeiffer originally intended for movies. In 1939, stage plays were added to the bill. The next year, following the destruction of the Wharf Theatre in the West End, Pfeiffer arranged for a summer season with the New England Repertory Company, so that Provincetown would not be deprived of summer theater. This evolved into the Provincetown Playhouse on the Wharf, discussed at 2 Gosnold Street.