Your first reaction on standing in front of this building may well be: “So where’s the church?” It’s hard to make out, what with all structural additions that have grown by accretion — and like topsy — in what used to be the church’s ample front yard. But if you step across Commercial Street for a slightly better perspective, you’ll quickly recognize the shape and volume of a 19th-century house of worship.

Better yet, swing around to Bradford Street and all will become plain. This really is a stripped-down incarnation of the Congregational Church of the Pilgrims, the [second?] oldest house of worship still standing in town. 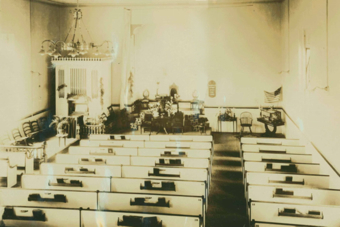 It was known as the First Congregational Church when it was constructed in 1843 with some of the timbers from its predecessor, the White Oak Meeting House. Services were conducted here for more than a century until the dwindling congregation sold off the building in 1947. Burt Lane leased it in 1951 for use as a summer theater, according to Clive Driver in The Banner. The steeple was removed in 1953.

The theater operator George I. Shafir had big plans for the property. In 1954, he renovated the main worship space into what The Advocate called a “modern, comfortable and well-equipped motion picture theater” and opened it as the Art Cinema — with deliberately discriminating bills featuring “fine, imported motion pictures and selected short subjects of cultural and art interest.” One of the first was The Little World of Don Camillo, starring the French comedian Fernandel. When the Art Cinema reopened for the 1955 season, The Advocate said its policy of catering “to the more discriminating class of moviegoers” had “proved that most people prefer the best in movies, whether foreign or domestic.”

Downstairs turned into a cultural hub, too. Gallery 256 opened in 1956 to display, in its own words, “paintings and sculpture expressing significant trends in contemporary American art.” One of its cofounders was Leo Manso (1914-1993), whom The New York Times described as an “important force in the development of Provincetown as one of America’s leading art colonies of the 1940s.” (His son Peter wrote Ptown.)

The inaugural exhibition had an amazing powerhouse of a roster, including Will Barnet, a student of Stuart Davis; Cameron Booth, a follower of Hans Hofmann; Henry Botkin, a cousin of the Gershwin brothers; Byron Browne, an outspoken advocate of Abstract art; Eve Clendenin, a painter and printmaker whom Hofmann had mentored; Nassos Daphnis, whose later work might be compared with Mondrian’s; Vivian DePinna, granddaughter of the founder of the DePinna clothing store; Seong Moy, a longtime teacher in town; Therese Schwartz, author of Plastic Sculpture and Collage; Frederic Varaday, an accomplished illustrator; and Adja Yunkers, an abstract painter and printmaker.

Walter P. Chrysler Jr. was among the customers. To the gallery’s advertising slogan — “Have You Bought a Painting This Summer?” — he could most emphatically say yes.

In 1958, the Martha Jackson Gallery opened in the building. Martha Kellogg Jackson (1907-1969) was a painter, collector and art dealer whose New York gallery was a stronghold of Abstract Expressionism. In 1959, the New Gallery, run as an artists’ cooperative, opened in the space. An early show there featured the works of Franz Kline, Karl Knaths and Edward Dugmore. Within a decade, the gallery beneath the Art Cinema was known as the East Coast Co-op.

By the mid-60s, George Shafir was sharing the duties of running the Art Cinema with his son, Bill Shafir. Very early in his career, John Waters convinced Bill Shafir to show Mondo Trasho on the midnight program at the Art Cinema. “I four-walled the theater,” Waters recalled in Shock Value, “agreeing to pay a set amount for each seat, whether they were filled or not. I did all the publicity and advertising and the cast hit the streets to give out flyers. All three shows were sold out.” Subsequently, Pink Flamingos and Desperate Living had their Provincetown premiers at the Art Cinema.

In the late 1970s, the theater was known as the Metro Cinema and was run by Monte Rome, who also operated The Movies across the street, at 237 Commercial. When Provincetown had its obligatory midnight screenings of The Rocky Horror Picture Show, they took place at the Metro. 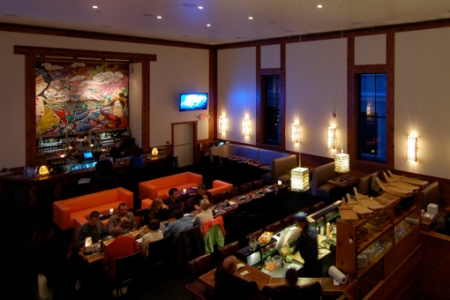 The next significant reincarnation of the auditorium space — this time as a restaurant — occurred in the early 1990s with the opening of Theodore Tine’s Euro Island Grill and Café and Club Euro. Fodor’s described the interior as “an eerie ocean dreamscape, with oceanic sea-green walls with a half-submerged three-dimensional mermaid spouting fish, and a black ceiling high above.”

In 2008, the operating license was transferred to Steven Schnitzer, who reopened the place as Saki, an “eclectic Asian” restaurant, in 2009. Schnitzer toned down the space considerably, leaving it closer to the original than it had been for more than 50 years. “The original church architecture survived the whims of business owners over the years,” Saki’s Web site says, “and it now bestows a refined air over the dining room.” The bar top and tables were made from original floorboards and beams that were salvaged during the renovation. The restaurant even prides itself on being the home of the ghost of the last pastor, identified as the Rev. John Ladd Sewall.

On the outdoor balcony overlooking Commercial Street, Schnitzer opened a second restaurant, John Dough’s. This pizzeria occupies the most prominent space in a jumbled complex of small commercial buildings that were constructed in the ample church yard beginning in the 1950s.

It was here that Napoleon Eugene “Gene” Poyant opened Gene’s Pastry Shoppe in the 1950s. Poyant was a leading figure of Provincetown life. After several years spent at his brother’s Cape Cod Bakery in Hyannis, Poyant went into business for himself in 1953 in a small building at 249 Commercial Street; about where the Crown & Anchor box office now stands. He was soon operating at the old church building across the way, which he and his wife, Lillian, purchased in 1958. The outdoor Café Poyant opened in front of the bakery in 1960 and the artist Harvey Dodd (b 1933) soon became a fixture here, with an impromptu gallery set up on the sidewalk where he undertook portraits of passersby.

Around the time that Poyant sold this property, in 1983, he was named Town Crier. (The first dynasty of genuine, year-round criers ended in 1927. The second dynasty, Pilgrim-clad criers who were sent out by the Chamber of Commerce as a publicity gimmick, began in 1935.) “I once saw him picking up his Pilgrim costume from the cleaners,” John Waters recalled. “It was a Diane Arbus moment.” Accused of making disparaging remarks about gays and lesbians and of steering tourists away from restaurants with gay waiters — statements he denied making — Poyant lost his municipal insignia in 1987.

Besides John Dough’s, the complex in front of the church structure houses Toko Indo, run by Linda and Hans Van Der Does, which sells handcrafted clothing and jewelry from Indonesia, taking the place of the Eclectiques store; Red Eye Coffee, a small coffee shop where Simply Silver used to be; and the Ben & Jerry’s Provincetown Scoop Shop. 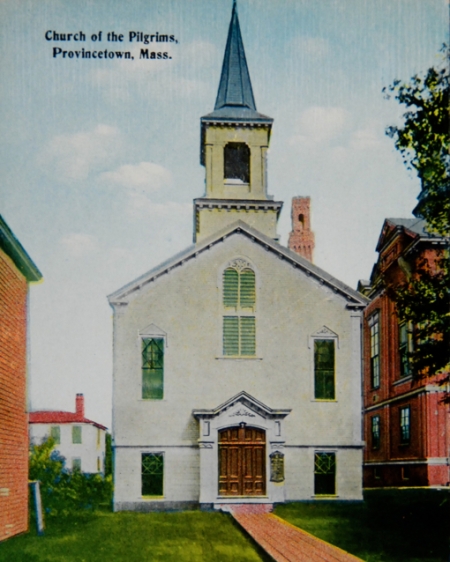 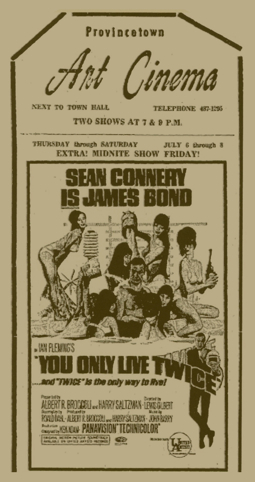 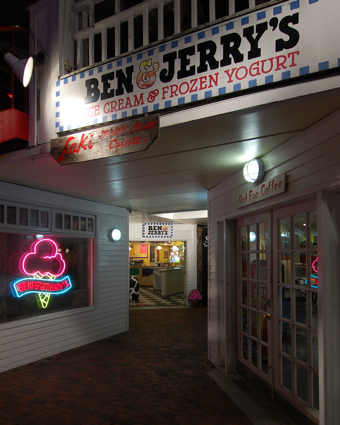 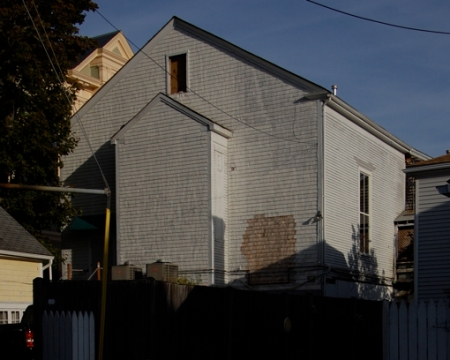