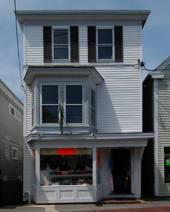 In the late 1950s and ’60s, this was the Nutt Hutt, a name that ranks among the best. As the title strongly suggests, it was where Provincetowners could buy fresh almonds, Brazil nuts, peanuts, pecans, pine nuts and walnuts, as well as candies made by the Pennsylvania Dutch. It shared quarters for a time with the White Whale Pantry. Nutt Hutt was established by Beverly L. Spencer (±1923-2007), who also owned the Apple Tree Cottage at 534 Commercial Street. (“Beverly L. Spencer, 84,” The Banner, 26 April 2007.) In recent years, this was Cape Cod Sweat & Tee Outlet and is now Michael’s Custom Jewelers, named for Michael Burris.