Fittingly, the Provincetown Chamber of Commerce is situated just about dead center at the commercial heart of Commercial Street: Lopes Square. It was constructed as the Board of Trade Building and originally stood ever so slightly offshore on pilings, reached by a short gangway. Because town criers have long had a formal or informal relation to the board or the chamber, I’m using this entry to briefly cover their history. (Kenneth Lonergan, the most recent town crier, is pictured here at the centenary of the Pilgrim Monument.)

In 1870, just ahead of the arrival of the Old Colony railroad, John Atwood Jr. convened a meeting of leading citizens at Marine Hall, 96 Bradford Street, to organize a Board of Trade for Provincetown. It’s unclear — for the moment at least — in what year the board built its headquarters near the foot of Railroad Wharf. 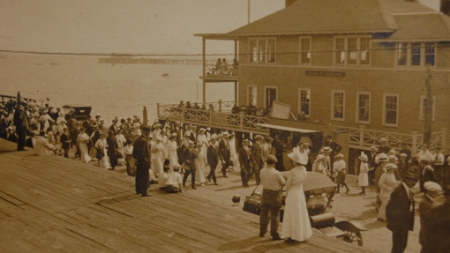 By the middle of the 20th century, the somnolent board — unable even to muster a quorum once every few months — was under withering attack from The Advocate, which lampooned it as the “Bored of Trade,” decried it as a “symbol of doddering senility,” and deplored its “complete inadequacy … as a functioning organization concerned with the civic and business development of our town.” (“Bored of Trade?” The Advocate, 20 October 1949; “Where the Fault Lies,” The Advocate, 18 September 1952.) Among the many pressing problems left untended by the board’s paralysis, the newspaper stated in a 1949 editorial: “Our town is becoming notorious as the summer headquarters of more and more so-called ‘fairies.'” The horror! 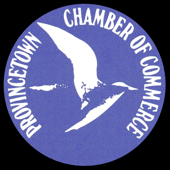 On the night of Jan. 9, 1950, under Marion “Bert” Perry, the Board of Trade met for one last time in order to dissolve, by unanimous consent, segueing almost seamlessly into the Provincetown Chamber of Commerce, which was joined at once by many board members. The chamber became the majority stockholder in the Board of Trade Building Corporation, which owned No. 307. Joseph E. Macara of Lands End Marine Supply, 337 Commercial Street, was soon elected the first president of the board, with Perry as his vice president and Sivert J. Benson as the clerk. The directorate included Frank A. Days of Days lumberyard, 24 Pearl Street; Arnold F. Dwyer of Arnold’s, 329 Commercial Street; and Chester Peck of the Provincetown Inn, 1 Commercial Street.

Both the board and the chamber have had direct or indirect dealings with many of the town criers, which is why the discussion of this peripatetic crew is placed here. A mural by Don Aikens at the Provincetown Inn depicts five of the more famous town criers — George Washington Ready, Walter T. Smith, Amos Kubic, Arthur Paul Snader Jr. and Fred Baldwin — outside the Board of Trade. “The town crier makes his headquarters in the Board of Trade Building,” Josef Berger said in Cape Cod Pilot (1937). “Decked out in fancy Pilgrim rig, he marches ‘up and down-along,’ ringing his bell and pausing now and then for his say-so.” 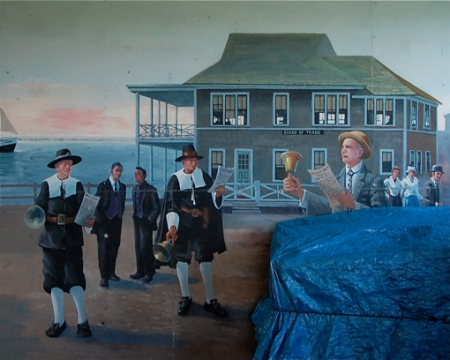 From the 19th century through the early decades of the 20th century, when radio was in its infancy, Provincetown had a functioning, official town crier; a herald whose job was to spread the news, as well as commercial notices of interest to townsfolk. “Hear ye!” was not the cry, at least not in the 1920s. Rather, it was “Notice!” preceded by three strokes of the bell. Nancy W. Paine Smith recorded a couple of typical announcements in The Provincetown Book: “Notice — To be sold at public auction, this afternoon at two o’clock, at J. & L. N. Paine’s wharf, three-sixteenths of the schooner Granada, with cables and anchors and all fittings.” “Notice — The steamer George Shattuck will leave for Boston tomorrow morning at nine o’clock, weather permitting.”

George Washington Ready was certainly the most famous in this line, remembered to this day thanks to his tale of spying a 300-foot-long, six-eyed sea serpent at Herring Cove one morning in 1886; a tale memorialized by Herman A. Jennings in Provincetown or Odds and Ends From the Tip End and attested to by Ready himself in an affidavit stating that he “was not unduly excited by liquor” at the time of the sighting. He was succeeded by his longtime assistant Walter T. “Hoppy” Smith, who was the last “real” town crier — that is, non-theatrical. Smith retired in 1927.

After a crier-free interval, the custom was revived around 1934. But now it was a promotional enterprise aimed at tourists, and the crier was — for the first time — outfitted. Amos Kubic, a Bohemian immigrant who chanced into the job, first wore a gold-colored pilgrim suit made by the wife of Joshua Paine, proprietor of the Provincetown Inn, whose idea it was to send a crier back out on to the streets. “Children trail him,” The Advocate reported in 1937. “People ask him millions of questions, and ask him to pose millions of times. He has been in the movies. He has broadcasted over the radio. He has been drawn by Howard Chandler Christie for a stamp design. He has been interviewed by countless newspaper reporters.” He was painted by Julius D. Katzieff (1892-1957), in a portrait shown here; and — happily for posterity — filmed and recorded by Universal Newsreels in a segment, “Old Fashioned Town Crier on Job Again,” that can be viewed on YouTube. (Joanne Carpenter, “Town Crier Is True Bohemian,” The Advocate, 19 August 1937.)

Arthur Paul “Art” Snader Sr. is the earliest town crier of whom there is still clear living memory, since he served from the early 1950s through the mid-1960s. He distinguished himself on any number of occasions. In his second season, 1953, he scored a clean beat on a national news story when he learned through a friend at a New York hospital that Senator Robert A. Taft of Ohio, until recently the majority leader of the Republican-controlled Senate, had just died. Snader had the story on the streets of Provincetown ahead even of the radio. His cries were credited by the town manager with securing enough voters for a quorum at the November 1960 special town meeting. And he was exposed to television audiences around the country that same year on the ABC quiz program Who Do You Trust? with Johnny Carson. (“Town Crier Turns in Bell After 13 Years of Service,” The Advocate, 14 October 1965.)

• Ambrose Hill, beginning in 1854 and through the 1860s. He inspired the young Walter Smith. 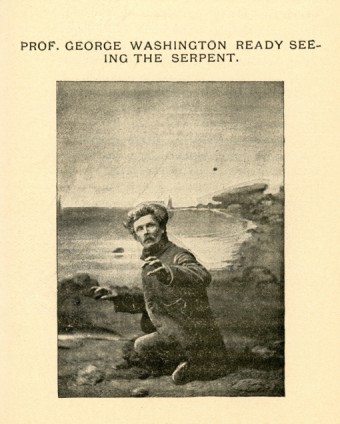 • George Washington “Professor” Ready (1832-1920) had a gift for self promotion. It’s hard to believe, then, that the birth of the sea serpent tale and the beginning of Ready’s career as a crier in 1885-1886 were completely coincidental. Wouldn’t you pay more to a crier who was already a celebrity in his own right? For a long spell in the early 1900s it seems he and Smith worked simultaneously. Ready was referred to in a 1912 profile as the “senior town crier.” He retired to Farmington, N.H., and died shortly thereafter. He is pictured below. (Robert Haven Schauffler, “Provincetown, the Heart of Cape Cod,” The Metropolitan, July 1912; “Last of a Vanished Race,” The Woodland Daily Democrat, 13 April 1920.)

• Walter T. “Hoppy” Smith (±1849-1932), was the town crier from about 1900 to 1927, when he retired at the age of 78 because paved sidewalks were much harder to walk than planks. His nickname owed itself to a lifelong disability. When Smith died, The Boston Post described him as the “last town crier in the United States,” but that distinction seems questionable. He is pictured below. (“Last of Town Criers Resigns,” The Worcester Post, 13 June 1927; “Last Town Crier in Nation Dead,” The Boston Post, 4 December 1932.)

• Amos Kubic (1863-1961), was the town crier from about 1934 until 1940. As the man who revived the custom, and was the first to be dressed like a Puritan, Kubic casts a far longer caped shadow than his relatively short term would indicate. He is pictured above, in a painting by Jules D. Katzieff, and below, in a postcard.

• Charles Walton, another actor, took over the role in the summer of 1941. (“Provincetown’s Crier Kept Busy by Queries,” The New Bedford Standard-Times, 13 July 1941.)

• The position went vacant for the duration of World War II.

• Arthur Paul “Art” Snader Sr. (±1885-1969) was the town crier from 1952 through 1965, except for the 1957 season. He was an alumnus of Temple University, had been an actor in New York and then an etching artist with his own shop on Peter Hunt Lane, as Kiley Court used to be known. He prided himself on being a town employee and therefore a “real” crier. He is pictured below. (“End Comes for Former Town Crier,” The Advocate, 23 January 1969.)

• Thomas Hennessey (±1918-1967), a teacher at Provincetown High School, cried in the summer of 1957 — the interregnum in Snader’s long tenure. His successor for the 1958 season, a 39-year-old former radio announcer named Erwin Bailey, left town after just a few weeks and Snader was asked to finished the term.

• James F. “Uncle Jim” Grogan (b ±1915) of Boston seemed like a great bet when he was hired for the summer of 1971. Town Manager Michael A. Botelho predicted that with Grogan’s warm personality and knowledge of Provincetown, he would “be with us for many years.” Before July was gone, however, so was Grogan.

• Napoleon E. “Gene” Poyant (±1922-1998) was already a well established figure in town — founding proprietor of Gene’s Pastry Shoppe and Café Poyant at 256-258 Commercial Street and resident of 109 Bradford Street — when he took up crying in 1983. In 1987, he was reported to have made disparaging remarks about gays, lesbians and the U.U. Meeting House. He denied it and his lawyer accused the selectmen of slander. Though he was finished in Provincetown, however, his career as a crier — in a cranberry red Pilgrim outfit, no less — had just begun. He was the town crier of Bourne, Barnstable, Barnstable County and, under a 1986 directive from Gov. Michael S. Dukakis, the Commonwealth of Massachusetts. (“All’s Not Well for Town Crier,” The New York Times, 25 October 1987; “Napoleon ‘Gene’ Poyant, Town Crier on Cape, at 76,” The Cape Cod Times, 1 June 1998.)

• Kenneth Lonergan has been the town crier since at least 2007. His showmanship is evidenced in this cover of Liza Minnelli’s “Ring Them Bells,” at the 2010 Carnival parade, on YouTube. 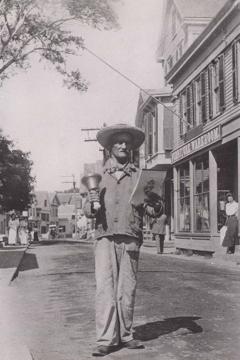 One thought on “307 Commercial Street”