Prudent Provincetown. Why have three buildings for three functions? In 1873, as a gift to the town, Nathan Freeman built a mansard-topped structure that housed the Public Library on the first floor, a Y.M.C.A. on the second floor and a photo studio on the third.

In the library’s early years, the most colorful of its stewards was Abbie Cook Putnam. And there were some memorable battles, like the time in 1939 when the work of John Dos Passos was barred from open shelves for fear that readers would find his books “radical and filthy.” In 1977, the library — by now the building’s sole occupant — was extensively renovated. The librarian at the time was Alice O’Grady Joseph (d 2010), who was in charge from 1965 to 1982.

But the library was soon cramped again. Not without controversy, the library moved in 2005 to the former Heritage Museum at 356 Commercial Street. Today, the Freeman Building houses Provincetown Community Television (PTV) and the Provincetown Tourism Office. It is a multipurpose building — once again. 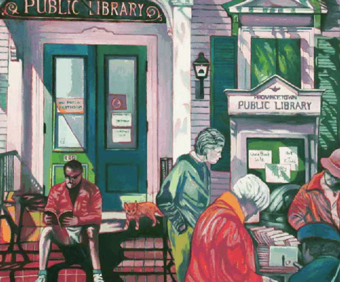