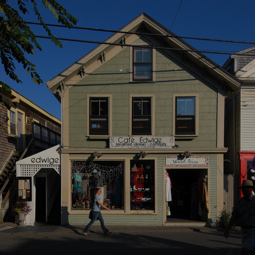 Edwige was the name of the mother of one of the original owners of Café Edwige, which has been around since 1974 — a very long time by contemporary Provincetown standards. In the 1930s, Pilgrim Cleansers and Dyers were here. During the early days of President Roosevelt’s “New Deal,” Johnny “Mott” Viera opened the New Deal Tavern in 1934. It moved next door in the mid-1940s. Joseph E. Manta then opened Joe’s Store — “A General Store brought up to the modern minute.”

No. 333 was the birthplace of Spiritus Pizza. It also housed Dodie’s restaurant on the ground floor, a space now occupied by Wild Rice, a woman’s clothing and apparel store.

Café Edwige began as a jazz club, according to the artist and musician R. G. Knudsen, who was once a part owner. The current owner is Nancyann Meads, of 1 Point Street, who supervises the breakfast business. Rocco Carulli, a graduate of the Culinary Institute of America, is the chef and creative director of Edwidge at Night. He formerly shared these duties with Steven J. Frappoli, another Culinary Institute graduate, who now owns and runs Frappo66, at 214 Commercial Street. ¶ Posted 2011-12-18 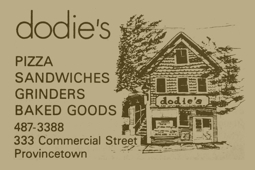