This large residential project, completed in 2011, was born into controversy since the developer, William A. Bonn of Coral Gables, Fla., had not received permission from the Historic District Commission to tear down the existing building on the site, the former Provincetown Boat Works — though he had been authorized to do so by the buildings commissioner.

When the smoke cleared, Neal F. X. Kimball, of Kimball Residential Designs in Provincetown, drew up plans for this large three-story structure. The Jon Goode Real Estate Blog reported in December 2011 that there were seven apartments in all, one- and two-bedrooms, from 465 to 798 square feet, at asking prices ranging from $476,000 to $998,000. Yes, that seems to be at least $1,000 a square foot. There are also two commercial condominium units. 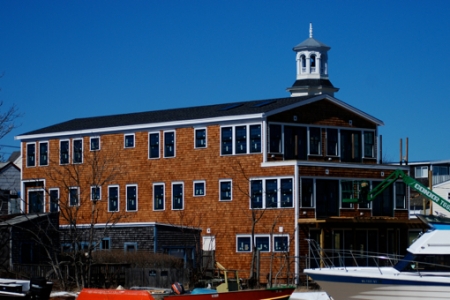