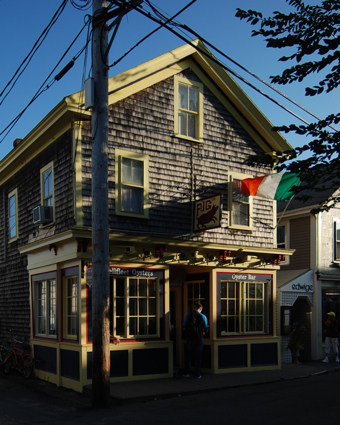 The Fo’csle was the spiritual ancestor of the Old Colony Tap; the premier dive bar in its day (said admiringly). In Shock Value, John Waters recalled The Advocate taking a picture of Dorothy Karen “Cookie” Mueller, a Dreamland regular, at the Fo’csle and using it to illustrate an article on alcoholism, with the caption, “Skulking in the depths of drunken depravity.” And to think: the Fo’csle was the cleaned-up version of the predecessor tavern, the New Deal, which wouldn’t even have let Mueller through the door. It maintained a men-only policy until 1959. 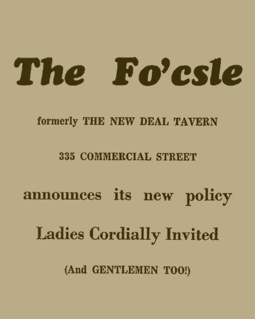 Before either bar arrived, No. 335 was home of the Flamingo restaurant, run by Susan Haymaker Lenhard and Anne Josephine Haymaker, which opened in 1940. At that time, the New Deal was next door, at No. 333, run by Johnny “Mott” Viera, working with his brother, Justin “Steenie” Viera. It appears that it moved here between 1945 and 1946. The business was taken over by Joseph F. Perry and Sylvester Santos and in 1959, they took down the “No Ladies Admitted” sign and replaced it with a “Ladies Cordially Invited” sign. In the bargain, they changed the name of the place to the Fo’csle — which is impossible to punctuate correctly even if you’re stone-cold sober. Variants include Foc’sle, Fo’c’sle and Fo’cs’le. (Steve Barrie, “Men Lose Retreat in Tavern Change,” The Advocate, 13 August 1959.) By next season, they had remade the place, calling on the talents of James Wingate Parr, who also worked on the Old Colony Tap and the Governor Bradford. It was much to the liking of Steve Barrie, the entertainment and nightlife columnist. (“Steve’s Own Corner,” The Advocate, 2 June 1960.)

The old kerosene lamps, the fish-net ceiling, the dory that hangs from the ceiling, the tac-rail logs, telescopes and sextant that decorate the back bar, the hand-built tables by Sylvester and Joe, the six-foot, two-cable wheel that was transformed into a compass by the imaginative James Wingate, altogether make The Fo’csle a most attractive libation place.

In the 1990s, through 2000, this was Fat Jack’s Café, managed by Richard J. Blanchette. In 2001, its licenses were transferred to Sara Cole and Clipper Ventures, doing business as the Squealing Pig. “The Pig” quickly established itself as a favored musical venue; so favored, in fact, that it was for a time producing more live music than was authorized. (Ann Wood, “Bar Seeks License for Bigger Bands,” The Banner, 4 December 2003.)