It’s been a full decade now, but it’s still hard to think that a building of such historic significance — the longtime waterfront studio of Blanche Lazzell (1878-1956), one of the most significant artists of Provincetown, which was depicted on the cover of 1989 monograph Blanche Lazzell — could have slipped under the radar and on to the rubble pile in 2002.

Lazzell (sketch in the Provincetown Artist Registry) arrived in Provincetown in 1915 to study with Charles W. Hawthorne and returned in 1916 to do so again, but soon switched her allegiances as a student to Oliver N. Chaffee, whom she regarded as one of the strongest painters in America, according to the 1989 monograph, by John Clarkson.

Two years later, she moved into a little fish house that had once stored sails, nets and baskets. After an interim spent in Italy and elsewhere, Lazzell came back to town in 1926 and “built a large, new studio and wharf on the spot formerly occupied by the little fish house for so many years,” Clarkson wrote. “From then on, Provincetown was her studio headquarters.” It may well be that The Lumber Wharf in the town art collection (reproduced below) was modeled from her wharf. Clarkson wrote:

“Blanche Lazzell continued to create and grow in her art and was active and in the public eye as late as 1951 — for in that year a very lengthy article appeared in The Standard Times of New Bedford which discussed her importance as a print maker and drew attention to her unusual garden, planted in barrels and boxes on her wharf above the waters of Provincetown Harbor.”

In discussing a memorial show at the HCE Gallery in 1956, The Advocate noted that the fish-house studio had been known since 1918 as the Blanche Lazzell Cottage. Among those who used the cottage in subsequent years were apparently Mary Oliver and Molly Malone Cook. The first home they shared, in 1964, was “a boathouse on the property of the Seguras family,” according to Cook’s obituary in The Boston Globe, which sounds like a description of the Lazzell studio.

Nelson A. Hitchcock III and Corey Kustes bought the waterfront end of the property, including the old Seguras house, from Peter J. Tompkins in 2000. In January 2001, Binder, Boland & Associates presented plans on their behalf before the Zoning Board of Appeals “to reconfigure buildings on the lot,” an application that included demolition of the waterfront shed. This was approved the next month. The structure was not demolished until January 2002. In other words, there would have been time for preservationists to figure out that attention had to be paid to the fate of the Lazzell studio.

But the structure was listed as “non-contributing” in the inventory prepared for the National Register of Historic Places in 1989 and therefore wasn’t flagged by the Provincetown Historical Commission, the Provincetown Building Department, the Cape Cod Commission or the Massachusetts Historical Commission, according to The Banner. (Mary Ann Bragg, “Historic Oversight; ‘Non-Contributing’ Designation Cited in Razing of Renowned Artist’s Studio,” The Banner, 17 January 2002.)

Perhaps the saddest paradox of the demolition was that it occurred just as an exhibition of her work, “From Paris to Provincetown: Blanche Lazzell and the Color Woodcut,” was about to open at the Museum of Fine Arts in Boston.

Josephine Del Deo may have put her finger on a more fundamental problem exposed by the failure of a system that was supposed to safeguard historic resources. “If you don’t have citizen awareness,” she said, “then you get a building being razed.” 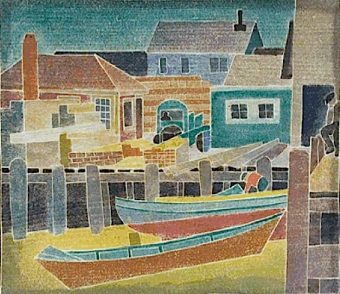 One thought on “† 351C Commercial Street”