The Angela of Angel’s Landing was no angel — certainly not in the eyes of America’s photojournalists or its political left wing. She was Angela Calomiris (1916-1995), the daughter of Greek immigrants and a member of the celebrated Photo League in New York City. On 26 April 1949, she stunned her colleagues when she appeared at the trial of 11 Communists accused of plotting to overthrow the government and disclosed that she’d been an undercover agent of the F.B.I. since 1942.

Her secret intelligence reports to the bureau and then her public testimony about having been recruited into the Communist Party by Sid Grossman, the director of the league, have largely been blamed for the downfall in 1951 of the Photo League, whose members and supporters included Ansel Adams, Berenice Abbott, Margaret Bourke-White, Lewis Hine, Aaron Siskind, W. Eugene Smith and Paul Strand.

Calomiris’s account of her espionage, Red Masquerade, was published in 1950. Her “patriotic assistance to the United States government,” as the F.B.I. put it, damaged her own career as a photojournalist. For instance, when she showed her portfolio of pictures to John Godfrey Morris, the picture editor of Ladies’ Home Journal, he said: “Even if I thought they were good, I wouldn’t give you an assigment. After what you’ve done, I could never trust you.”

In the early 1960s, Calomiris settled in Provincetown and began acquiring the properties at Angels’ Landing, aiming generally for women guests and specifically for lesbians. Though she died in 1995, the business continues. It is now a condominium; each unit is individually owned.

Judy Dutra, the author of Nautical Twilight, fills in the story of Angel’s Landing before Angela:

“In the 1940s, the building was owned by Michael and Amelia Diogo. They had six children, among them was Michael Diogo, a captain in the Air Force during World War II. He settled in Florida with his wife Joan. They had many children, but the oldest daughter’s named is Angel. When Mike came to Provincetown to visit his mom and dad after he war ended, he flew with his wife and daughter, landing in front of the family home, hence the name ‘Angel’s Landing.’ Uncle Mike (as we call him) is still alive — 91, living in Florida with his daughter Angel, and their family. Mike used to land his seaplane in Pilgrim Lake when the weather was too rough. He also was the first and founder of the Provincetown Airport, which was taken over a few years later by John Van Arsdale. Uncle Mike was honored at the Provincetown Pilgrim Monument a few years ago for both his service to his country and for his contribution to Provincetown’s aviation industry. I can only imagine what it was like to fly from Florida in the late 1940s. Must have been very exciting.”

This building, at the east side of the complex, housed the Ellen Harris Gallery for many years, from the late 1960s or early 1970s until the death of its founder, Ellen Harris Winans (1928-1997). Among the artists shown at Ellen Harris were Al Davis, Hilda Neily (Provincetown Artist Registry) and Carol Whorf Westcott. Provincetown Arts said in 1997 that Harris was “remarkable for the emphasis she placed on fine crafts, especially glass.” She was also honored posthumously by the National Gay and Lesbian Task Force as “one of the most successful lesbians in business in the country,” whose gallery “supported many local and nationally acclaimed gay and lesbian artists.” Harris is buried in Town Cemetery.

The principal Commercial Street storefront is now occupied by Birdie Silkscreen Studio, a clothing store that has been in business more than 20 years. “Birdie” is Roberta Cornette whose artwork is described on the Web site as “specifically designed with images of Provincetown and Cape Cod, using colors reflecting ocean, sand and sky.” Cornette is also a co-owner, with Evelynn “Lin” Gentemann, of 351 Commercial Street, the home of Good Scents, of which Gentemann is proprietor.

While Birdie has the street address 355, the downstairs businesses have the number 353. Why make things easy? There is the Provincetown branch of the Box Lunch chain of franchise sandwich shops, out of Wellfleet, which was founded by Owen MacNutt in 1977 and is best known for its rollwiches.

In 2011, Scott Cunningham brought his ScottCakes bakery here, offering the pink cupcakes for which he’d become locally famous the year before when he ran afoul of town regulations — or, rather of the lack of clarity in the interpretation of town regulations — for selling cupcakes openly and notoriously on the sidewalk. (Pru Sowers, “Cupcake Controversy Erupts on Provincetown’s Commercial Street,” The Banner/Wicked Local, 27 August 2010.) 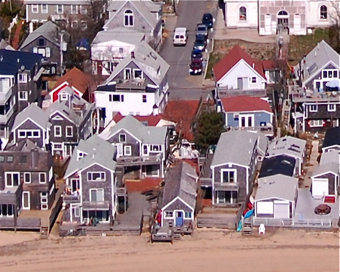 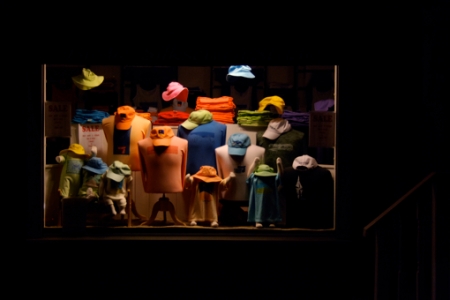