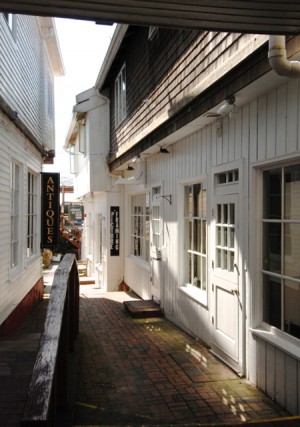 Pepe’s Wharf may be the loveliest and most inviting of all the little waterside shopping and dining enclaves, thanks to its entrance portal, multiple levels, lush plantings and numerous corners, around which a passageway unfolds down to the restaurant and beach. The Abstract Expressionist artist Taro Yamamoto once had his studio here. The compound was developed in 1966 by Nils Berg and Eva (Kaye) Berg, and first called the Wharf of the Seven Oars. “Pepe” was the nickname of the Bergs’ son, Nils. The restaurant Pepe’s opened in 1967. Howard Mitcham was at one time the head chef. The Bowersock Gallery, founded in 2004, is run by Steve Bowersock and Michael Senger. The building that now houses Kelly Blake’s Go Fish clothing store was the Provincetown Art Shop. Here in 1966, Mooncussers-The Man’s Boutique heralded the arrival of “Tom Jones Shirts” — a truly terrifying concept.