Two great sunburst pediments, at the front and side entrances, lend considerable distinction to this house, which was the longtime home of Mary (Cabral) Enos (±1882-1963), the daughter of Capt. Joseph Cabral and Rose Cabral. She was graduated in 1903 from what was then the Hyannis Normal School and began teaching at the Eastern School, 492-494 Commercial Street, which is now the Schoolhouse Gallery.

She transferred to the Center School, 126 Bradford Street, to serve as principal, from which she moved as principal to the Western School, where she remained until 1944, when she retired after four decades in the Provincetown public school system. By contrast, her husband, Frank A. Enos, only worked 32 years for the Texaco.

In 1932, Sarah E. Winslow opened a grill room here called the Winslow Tavern. In recent years, the parlor-floor space has been used by Blú Day Spa (now at 306 Commercial Street) and Cape Light Fine Art (now in Hampden, Mass.). It is currently the headquarters of a real estate firm called DwellCoastal, established in 2011 by Meg Stewart and her wife, Maureen Wilson, who have lived in town since 2001, and Joel Harms, who moved permanently to Provincetown in 2011. 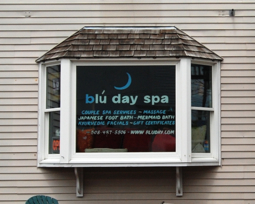