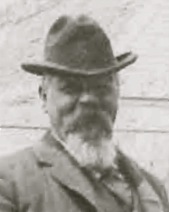 Among the richer wharves historically was that built by Stephen Cook, of 378 Commercial Street, and best known as the George O. Knowles Wharf, after Cook’s nephew. It was home of a renowned fishing fleet, including the Carrie D. Knowles, named for Knowles’s daughter. It served as the first home of the influential Beachcombers association, long since hunkered down at 463 Commercial Street. It briefly harbored the Casino, one of the earliest semi-fancy nightspots in town. And it was destroyed on that long-remembered night in November 1926 when the Coast Guard’s storm-tossed cutter USCG Morrill, on rum-running interdiction duty, caused more havoc in Provincetown in a few hours than bootleggers caused throughout Prohibition. Bull Ring Wharf, No. 381-383, is successor to the Knowles Wharf.

George Osborn Knowles (b 1842), a Provincetown native, was the son of Cook’s sister, Delia (Cook) Knowles, and Joseph Pepper Knowles (b 1815). His siblings were Joseph Williston Knowles, Lucy Ann Knowles and Julia Cook Knowles. He went to work as a clerk in his Uncle Stephen’s store and took over the business in about 1880. The firm specialized in sperm whale oil and fish oils, and had three whalers in his service. Knowles and his wife, the former Georgia M. Dyer — yes, George and Georgia — had a daughter, Carrie Dyer Knowles, who was born in 1876.

As was customary in shipbuilding families, 11-year-old Carrie was the namesake of the schooner Carrie D. Knowles, built at the Tarr & James shipyard in Essex, Mass., and then outfitted at Knowles Wharf. The boat’s first trip, to the Caribbean, from June 1887 to October 1888, yielded 335 barrels of oil. She made 15 more successful voyages until 27 January 1904, when she set out from Provincetown under the experienced command of Capt. Colin Stevenson, bound once again for the Caribbean whaling grounds. That was the last anyone heard from the ship or its crew, though five years later — in what was apparently a cruel hoax — a person identifying himself as Elisha Payne, a crewman on the Carrie D. Knowles, contacted authorities in the British West Indes, saying he had managed to survive. Stevenson’s widow, who was about to remarry, never did so in consequence of this news, which she evidently never stopped believing. (James J. Theriault, “A Seafaring Heritage,” King Hiram’s Lodge, 1995; Laurel Guadazno, “The Mystery of the Carrie D. Knowles,” The Banner, 24 February 2000.)

How 28-year-old Carrie Knowles reacted to this tragedy is something I’ve yet to learn. But what I do know is that she fared a lot better than the schooner that bore her name. She married Irving Winthrop Cook of Provincetown. The couple moved to Hyannis and he became president of the First National Bank there. Mrs. Cook lived to celebrate her 100th birthday in 1976. 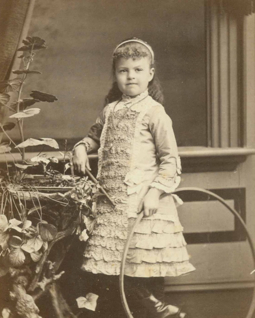 She and her husband sold this property in 1909 to the Provincetown Cold Storage Company, just to the west, at 363-365 Commercial Street. The company sold the wharf and adjacent upland structures in 1915 to Ednah P. Higgins, who sold them in turn to the Higgins Lumber Company in 1923.

Almost exactly a year after taking ownership of the pier, in 1916, Higgins leased one of the pier sheds to the embryonic Beachcombers club, a very informal yet ultimately very exclusive association of artists and their friends; think Century Association or Skull and Bones members in grass skirts. George Senseney was voted Skipper of the fledgling group, George Elmer Browne the First Mate and Charles W. Hawthorne the Second Mate. Though it would be nice to gloss over this unfortunate fact, it remains that the club’s first fundraising entertainment was a minstrel show in which Browne sang Camptown Races and Hawthorne sang Old Folks at Home (“Way down upon the Swanee River”). After a musical interlude, club members staged a one-act comedy called Freedom by a 28-year-old writer named John Reed.

Sometime after, an establishment called the Casino opened on what at least one contemporary account referred to as Higgins’ Wharf. “The Casino was one of the first eating places and night clubs in Provincetown,” Mary Heaton Vorse wrote in Time and the Town. “It was a pleasant place with a lovely view of the harbor.”

On 16 November 1926, an unusually violent gale coursed through Provincetown, where the Coast Guard cutter Lot M. Morrill was at anchor. The 145-foot, 288-ton vessel, named for President Grant’s Treasury Secretary, had been commissioned in 1889, requisitioned by the Navy for service in the Spanish-American War and again in World War I. Based in the Great Lakes, the Morrill was temporarily assigned to Cape Cod to help break up the rum-running traffic — a mission that stood roughly the same chance as if she’d been assigned to stop the ebb and flow of the tides. The winds that Tuesday afternoon and evening were so severe that the Morrill broke anchor. With a full crew aboard, perhaps as many as 50 men, she was pummeled helplessly, broadside to the shoreline.

“She drifted in between Higgins’ wharf and Pickert’s Canning Factory wharf,” The Advocate reported, “and with the tossing about both wharves were completely demolished, the bow of the big steel ship striking one wharf and the stern the other wharf. The damage amounts to thousands of dollars. … Although the damage was great, there was no one injured. Several gasoline boats were sunk and more or less smashed. The Casino building and new garage on Higgins’ wharf were thrown upon the tide and washed ashore. … The street was lined with hundreds of sightseers who were horrified at the destruction, the crashing and smashing of timbers.” (“Severe Gale in the Harbor,” The Advocate, 16 November 1926, in the Scrapbooks of Althea Boxell.)

Two of of the photographs below show the Casino out on the wharf and stranded on the beach, more or less intact. Vorse wrote its obituary:

“A wrecked house is an unnatural-looking thing.

“A gangway had been thrown to the Casino and one could walk up its steep, inclined floors. The wharf on which it stood had been wrecked and the heavy piles had gone hurtling down the waterfront, pounding the bulkheads to pieces like battering rams.

“One could hear their steady smash-bang through the night. It was a noise that seemed to have a conscious fury, as if the storm was intent upon tearing the town to pieces and was using wrecked piles to make a breach for the sea.” 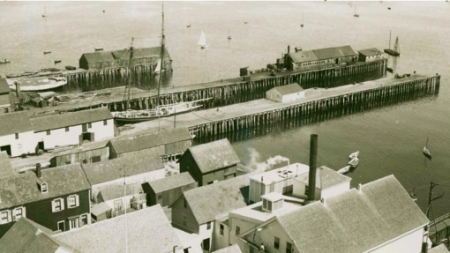 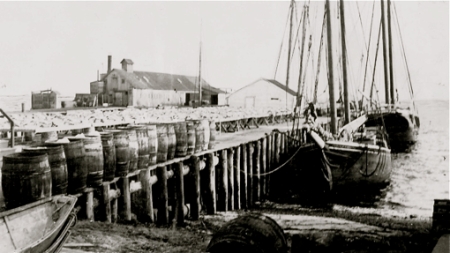