This is among the terrifically-evocative-because-largely-unreconstructed utilitarian waterfront structures of the East End. Storefront tenants have included: • The Pilgrim Bar and/or Pilgrim Grill (depending on what day the advertisement or newspaper story came out), run in the 1930s by George W. “Mac” McLaughlin, a chess and billiard player who was also renowned for his fried clams, and in the 1940s by Howard “Poppy” Wenzel. • Pala Batik was founded in the early 1950s by Jack Larned and his wife Eleni (Papparasiliou) Larned. The shop sold gifts from Bali, Greece, India, Iran, Japan, Java, Spain, Thailand and Turkey, and was still going in the latter 1960s. Its logo was the Hindu figure Kirtimukha and its name was taken from the first two letters of Papparasilious and Larned, combined with the traditional Eastern dyed cloth. • Far Side of the Wind, in the early 1990s, described by Gillian Drake in The Complete Guide to Provincetown as an “interesting mix of jewelry, crystal, arts, crafts, tapes, books, wind chimes and Native American artifacts.” • Lady’z Vintage Clothing, about which Fodor’s said, “It’s a favorite of drag queens, who especially favor the costume jewelry and boas, but there are all kinds of cool threads here.” • And the Poli Gallery, a showcase for the work of Nicoletta Poli and her husband, R. G. Knudsen, which is now at 349 Commercial Street.

In 2011, Paul Wisotzky, a potter who lives in Truro and teaches at the Truro Center for the Arts at Castle Hill, opened the Blue Gallery and Blueberry Lane Pottery in this space. The gallery shows his work and that of other contemporary followers of the Arts and Crafts movement who “understand that making things by hand is one of life’s necessities, both as an expression of ancient life forces and an antidote to the increasing mechanization that surrounds us.”

Residents here have included Frank “Spucky” Silva (±1894-1955), a Coast Guardsman for more than a quarter of a century, who — with his brother Louis — built the dune shacks now known as Euphoria and Thalassa (they called it Seagoin’). He was also the father of Helen Valentine and Mary Lambrou. 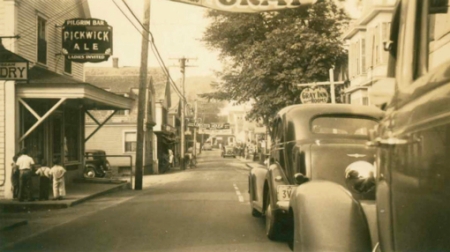