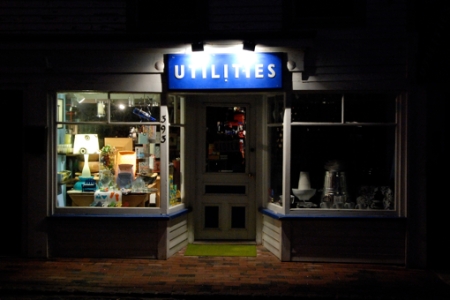 In events 40 years apart, 393 Commercial Street has embodied two very different trends in the development of modern Provincetown: once as the Sun Gallery, an especially provocative and influential establishment of the later 1950s and early 1960s; and currently as Utilities, which is more than 15 years old and reflects the stylish domestication of Provincetown. In 1995, when Hunter O’Hanian and Jeffry Cismoski were looking for a place to house their new business, the idea of a design-conscious houseware store was still somewhat incongruous. Roberta J. “Birdie” Cornette, the go-between with the landlord, later confided that at first she didn’t quite believe them. “She was a little concerned,” O’Hanian told me, “because she just assumed that ‘kitchen gadgets’ was code and that we would be selling sex toys and dildos. ‘Who in their right mind would open a kitchen store in Provincetown?’ she thought.”

Before Dominic “Val” Falcone and Yvonne Andersen opened the Sun Gallery in 1955, the storefront space at No. 393 had been used, among other things, as the Joseph C. Nunes Funeral Home in the 1930s and as Earle Pilgrim Jewelry Originals in the early 1950s. Pilgrim set the tone for the Sun Gallery by inviting Wolf Kahn and John Grillo, students of Hans Hofmann, to show some of their paintings in his store. “This was at a time when it was unheard of for budding talents to be exhibited,” Dorothy Gees Seckler wrote in Provincetown Painters, 1890s-1970s (1977). But once Harriet Adams leased the space to Falcone and Andersen (for about $400 to $500 per year), things really started hopping.

Andersen had arrived in town in 1953 to study with Hofmann. She met both Peter and Wolf Kahn, and Grillo. While working at the Lobster Pot, she met Falcone, a poet. Two years later, they opened the Sun Gallery, in part as an answer to the Provincetown Art Association, which seemed to them biased against contemporary art and younger artists. By contrast, Falcone’s manifesto of 1955 declared:

A man wants to be heard. A man can be heard at the Sun. There is
tolerance here. The Sun will look and listen patiently searching
trying to find out things. Man needs the Sun.

The Sun is open to all the new voices, always listening for the
new sounds, lifting them from the darkness into the light.

And many years later, they said they had achieved that goal. “We never turned anyone down,” Andersen and Falcone said. “It was a truly democratic thing — people were accepted on the basis of their work. People who we felt were really important got one-man shows or were shown in our theme shows.” Those included Josephine Del Deo, James Forsberg, Joan Wye Forsberg, Lester Johnson, Jan Müller, Robert Thompson, Tony Vevers and Taro Yamamoto.

Plus, there was a 20-year-old fellow with reddish-blond hair named Charles Grooms, whom Falcone met washing dishes at the Moors and nicknamed “Red.” In 1959, the Sun Gallery presented a play by Grooms called Walking Man, which included the artist Bill Barrell in the cast. “With its abrupt, disjointed action, Walking Man was probably the first Happening to use live actors,” Vevers wrote in The Sun Gallery, for a 1981 exhibition at — of all places — the Provincetown Art Association and Museum. Grooms and Andersen had earlier collaborated on a performance piece called Celebration of the Death of the Sun. Vevers described it as a “two-person painting which was executed in a ritualistic manner at midnight over a period of several nights.” The artists wore paper bags over their heads as they worked. The City, an installation/environmental piece in 1958 included photographs by Robert Frank, poems by Falcone, drawings by Grooms, charcoals by Johnson and sculptures by Andersen “encrusted with a tarry substance,” Vevers wrote, “a material representation of the brutality of urban life.”

Assessing the remarkable years of the Sun under Andersen and Falcone, Seckler said: “If they were exceptionally open to such innovations as happenings, events and assemblage art, it was because they had a hunch the time was ripe for a more informal, involving, even participating, relationship between artist and viewer.”

Barrell, a native of London who’d emigrated to the States in 1954, had his first show at the Sun Gallery in 1959 and took it over a year later from Andersen and Falcone. “One of his most provocative exhibitions was of the cardboard and burnt-edge newspaper collages by Claes Oldenburg,” Seckler wrote. But Barrell’s best-remembered brush with controversy — and threatened censorship — occurred in 1960 over an exhibition of monotypes by Vevers. Barrell tells the story best, in “The Warning,” on his blog. The chief of police and another officer have entered the Sun Gallery on the second night of the Vevers show:

They walked around the gallery looking at the monotypes while slurping their dual-flavored ice cream cones – and snickering. The chief came over to me and asked what I called this work. I told him that it was a form of printing known as monoprint, which means each was one of a kind. He said, ‘No, what I mean is — what is it?’ I told him it is art. He responded: ‘Well, I’ll tell you what I think it is. I think it’s pornographic.’

I was a little taken aback and asked what is pornographic about them? ‘Any of the work that shows pubic hair,’ he answered. Well, there were none that were void of pubic hair. He demanded that I close the show at once. I told him that we were to close at 10. ‘Now,’ he said, and left.

It was just around 9 p.m. at this time. I was perplexed and thought maybe they were having me on, though it seemed they were serious enough. I took a chance and did not start closing until five to 10. The police returned at 10 as I was shutting down the lights. They walked right in and said, ‘I told you to close.’ ‘I am closing,’ I answered. ‘Well, if this exhibition opens tomorrow, both you and Tony Vevers will be arrested.’ On that, they left.

The Three Graces’ pubic hair instantly became the cause célèbre in town that Saturday night and Sunday morning, involving Vevers, Fritz Bultman and Hudson Walker, among other luminaries of the art scene. Walker proposed a compromise of strategically positioned sheets in the window, so the offending hairs could not be seen by tender, impressionable youngsters. The gallery opened that night with Barrell on tenterhooks, waiting to see what the police response would be.

Then, with a great rush of air, in walked Hans Hofmann, the renowned painter who seldom came to town. He walked around and looked at the work. Then he slowly turned to me and asked for paper and pencil. With a great flourish, he wrote a declaration of innocence stating that the nude could be found all through Europe – in the Vatican, the Louvre and in all major museums. He signed it and left. The crowd poured in and signed Hofmann’s manifesto. Some of those signers were Milton Avery, Myron Stout, Walter P. Chrysler, Karl Knaths, Claes Oldenburg, Chaim Gross, Edith Ziegler. And me.

The show went on.

Barrell headed the gallery for another year. In the summers of 1962 and 1963, it was operated by Nat Halper, who brought in George Segal, among others.

Fast forward to 1995, when O’Hanian and Cismoski — both approaching their 40’s and burned out in their jobs, respectively, as corporate litigator and resident production stage manager — moved to Provincetown full time. As they tried to figure out how they’d keep bread on the table, they ruled out a restaurant or a guest house immediately, leaving them puzzling over what kind of store might make sense. “We struggled for weeks,” O’Hanian recalled. “Nothing presented itself.”

Then driving back to Boston one Sunday afternoon, the notion struck me that I had wanted to buy a new spatula that weekend and the only two choices we had were at the A & P and Land’s End True Value hardware store. Bingo! What this town needed was a Provincetown version of Williams-Sonoma and Crate & Barrel.

Utilities was born. The couple found No. 393 on Thanksgiving weekend in 1995. A men’s clothing store had been there most recently. There were no traces of the Sun Gallery; not that the two nascent entrepreneurs were combing the place for cultural provenance. What they liked about the location was Elena Hall’s ample parking lot next door and the rebirth across the street of the Ocean’s Inn as the Commons.

Their store opened on Easter weekend in 1996. O’Hanian said he and Cismoski had a simple, straightforward criterion for what they would stock.

In the beginning, we absolutely only sold things that we would own ourselves. I remember writing that first check for $25,000 for inventory, thinking that it was going to be a great success or all of our friends were going to get wonderful Christmas presents that year.

Provincetown being Provincetown, everyone wants a piece of it. We looked for unique items that seemed different, that people could take home, even though they might be able to find them in their local mall. There was ceramic pottery by a woman in Berkeley that I used to dream about.

Given its location, the number of people we knew, what we offered and really the customer service, it was popular from the beginning. Everyone loved going in there and looking at things.

By 2003, they had tired of the grind. O’Hanian was by then the director of the Fine Arts Work Center and Cismoski, who managed the store, wanted to get back into theater. Not long after letting it be known that Utilities was for sale, they found a buyer in Dennis Lemenager. “He has owned it now longer than we did,” O’Hanian said in 2012, “and has done a wonderful job preserving its original mission and taking it to the next steps.” On its Web site in 2012, Utilities showed its top 10 best-selling items. Four of the spots on its list were taken by platters or plates embellished with patterns Thomaspaul. Other popular items were paring knives by Kuhn Rikon, shower curtains by Turf Homebody Heaven, stemware by Rolf Glass, egg poaching pods, a garlic mincer and tumblers. None of them are encrusted with a tarry substance. 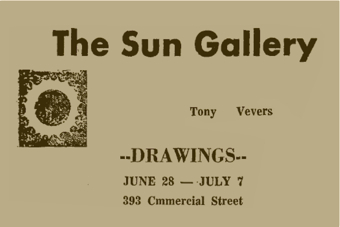