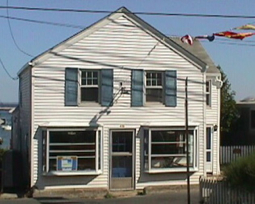 “One always stops at Lizzie’s on the way home from the movies!” Althea Boxell didn’t often interject such enthusiastic commentary in her remarkable scrapbooks, so we might take this emphatic notation in Book 1 as a sure sign of the popularity of E. I. Livingston Fountain Service, run by one Elizabeth Isabel “Lizzie” Livingston (±1879-1945) of 217 Bradford Street. In 1959, as Jo’s Soda Shop, the establishment played a small role in the great drama of a 45-foot beached fin whale, a story so memorable it was retold 15 years later by Jim Young in When the Whale Came to My Town.

Livingston was born in Provincetown of parents who had both emigrated from Nova Scotia. In about 1918 she opened her store, selling candy, brownies, fountain sodas and Fro-Joy brand ice creams and sherbets. Only ill health could have persuaded her to retire in 1943, when she turned the business over to Josephine Newman. At the time, The Advocate said, “She has sold penny candy, during her quarter of a century, to Provincetown mothers and fathers when they were children, just as she served their children. And, she said, the older folk don’t change much. They still edge over with a hankering toward the penny candy case.” (“Old Candy Shop in New Hands,” The Advocate, 15 July 1943.)

In December 1959, the beachfront outside the shop, by now known as Jo’s (after Josephine Newman, who succeeded Livingston), was the setting for the last hours of a protracted agony, as the Coast Guard and the people of Provincetown tried to figure out what to do with a 45-foot, 50-ton male finback that beached itself repeatedly, defying five efforts to tow it out to deep water. The creature first came ashore near the cold storage that is now the Ice House Condominium but landed here on returning from one of the rescue efforts. Donald Westover of the Animal Rescue League kept the whale wet by spraying it constantly with a hose. “His skin sparkled like silver again,” Young wrote in his account.

With their cheers, the crowds that gathered along the beach evidently took the side of the whale — whom they called Willie — in its struggle against even briefest captivity. “They were happy to see that titan of the deep plunge into the sea and come up in a cascade of water, spouting a spray of water into the air,” wrote Daniel Bernstein, who photographed the event. (His pictures appear in When the Whale Came to My Town.) “Clearly, the animal belonged in the sea and not on the beach. Clearly, the whale didn’t want a rope around his flukes, and in his own element, he defended his rights and his privacy in a spectacular way.” Bernstein also documented the darker side of the story: onlookers carved names or initials into the whale’s side, stuffed a can into its blow hole, bashed its left eye bloody with a five-gallon can, threw rocks in its mouth and climbed on top of it to have their pictures taken, cutting up its dried flesh with their shoes — while it still lived. (“In Our Mail; Shameful Cruelty,” The Advocate, 17 December 1959.)

When not being cheered or attacked, the whale was being probed. Scientists at Woods Hole Oceanographic Institution hurried to Provincetown to take advantage of the rare opportunity to record a whale’s vital signs. Their cardiogram was hooked up to Herman Rivard’s portable generator. The current was too unsteady. Herman J. Tasha swung into action. “Bearded Mr. Tasha, an enthusiastic helper throughout, got waterproof Christmas tree lighting cable and strung it to Joe’s Soda Shop for regular 110-volt current,” The Advocate reported. “That worked fine. From 8 a.m. to noon, Dr. [Alfred W.] Senft and his helpers took intermittent cardiograph readings, while Dr. [John W.] Kanwisher took temperature measurements and respiration samples.” The stranded whale had a pulse rate of 25 beats per minute, compared to 72 beats per minute for humans, and a body temperature of 92 degrees. (“Stranded Whale Gives Wanted Records Before Being Finally Towed to Sea,” The Advocate, 10 December 1959; “Scientists’ Ingenuity Tested Here for First Whale Cardiogram Tools,” The Advocate, 24 December 1959.)

The whale died after 36 hours and the Coast Guard was finally able to tow it back to the sea. The building stood until 2002, when it was torn down and replaced by its new owners, Greg Brown and John Anderson.

One thought on “† 409 Commercial Street”