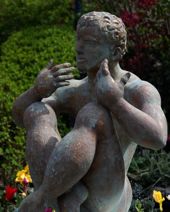 The Mews has, for many years, been one of Provincetown’s grown-up restaurants. Established in 1961 by Nicholas “Nicky” Wells and Ray Martan Wells at 359 Commercial Street, it is now under the general management of Ron Robin and has been here since 1993. It occupies a site that has been a haven of hospitality for nearly 80 years. Lucille (Crawley) Donahue’s Everbreeze Club (or Everbreeze Restaurant, or both), which operated here from 1935 to 1980, was — in its early days — a self-contained little summer resort: “Swim, breakfast, lunch, play and tea at the Everbreeze,” said a 1937 ad. “Free tea readings every afternoon. Attractive bath houses with showers. Suits rented. Games and beach chairs at your disposal.”

Donahue (1904-2000) was a Provincetown native, the daughter of John and Mary Crawley. She opened the Everbreeze in 1935. She and her sister, Vivian (Crawley) Worman, also ran the women’s clothing boutique, Lucille and Vivian, at 435 Commercial and in Harvard Square. In the winters, for good measure, Donahue worked as a receptionist at Bonwit Teller in Boston.

Franco’s by the Sea was one of the next incarnations of this waterfront space, beginning in the late 1980s and running through the early ’90s. The Complete Guide to Provincetown, by Gillian Drake, called out its “classy Art Deco surroundings.” The upstairs nightclub, Tallulah’s Bar, featured music from the ’30s and ’40s. There was also a Promenade Deck overlooking the beach.

Ron (Polcari) Robin, who had put disco on the Boston radio dial in the 1970s at WBOS, bought into the Mews in 1983. Ten years later, he moved it here, bringing along panels of ornamental woodwork that had been salvaged from the Prudential Building of 1892 in Newark, N.J. The sculpture out front is by James Tyler. As of 2012, the senior team at the restaurant included Robin, general manager; Karl Dietz, restaurant manager; Laurence deFreitas, executive chef; Luca Michelini, sous chef and kitchen manager; Pingle Bowden, bar manager; and Caroline Putnam, assistant restaurant manager.