This monumental house serves as a gateway to Kiley Court, which was once also known as Peter Hunt’s Alley or Peter Hunt’s Peasant Village. Fittingly, its commercial space has almost always had some kind of link — either in spirit or in practical business terms — with the artistic ambience of this lovely cul-de-sac.

Back in Peter Hunt’s day, in the mid-40s, this was the home of the Gentle Outdoor Shop, perhaps on the patio out front, where Esther Gentle sold full-scale stenciled reproductions of works by the likes of Milton Avery, Hans Hofmann and Pablo Picasso (whose Provincetown period has been little documented). In 1947, Ernest E. Perry and Priscilla Widger opened the Little Gallery, which showed a stellar roster of Provincetown artists. The next year, Shirley Yater opened the Town and Country Life Dress Shop in the basement space, while a café called To the Queen’s Taste operated on the patio. Helen Carter Country-Wear was also here at that time.

The Hookery was opened in December 1952 by Alice Alexander. It catered to customers interested in hooking and braiding rugs. “An enthusiastic hooker herself, Miss Alexander became interested in the craft quite by accident,” The Advocate reported (“‘Hookery’ to Open for Rug Makers,” The Advocate, 20 November 1952). She was followed in the mid-50s by Frances Euler and the Collectors’ Shop — “Handmade Things of Distinction (Wedding Present Headquarters).”

What may have been Provincetown’s first epicurean grocery store, Ciro Cozzi’s La Dispensa, opened in here in ±1967, complementing Ciro & Sal’s restaurant farther down the courtyard. As its name — the pantry — suggested, it was where one could find imported foods and kitchen ware. By the 1990s, the space was back in gallery use, now as the Chandler Gallery.

Marla Rice and Richard Polak founded their gallery in 1992, with Rice taking over sole proprietorship in 2005. Their roster of artists includes James Tyler, whose nude male figure greets diners at the Mews across the street.

Residents of the house have included Walter Hayn (d 1947), a muralist and illustrator who was an original member of the Sixes and Sevens Club. 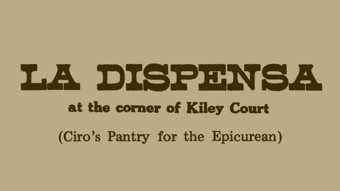