With the addition of the Alvin Ross Wing in 2005, the facade of the Provincetown Art Association and Museum expressed the tension between traditionalism and modernism that has long vitalized this institution. With glass walls, the new ground-floor gallery reaches out to the community; a deliberate gesture by the architects, Machado & Silvetti Associates. The addition roughly doubled PAAM’s size. It shows that contextual architecture doesn’t have to be imitative. Instead, the new wing, clad in cedar shingles and louvers, keeps a deferential distance from the Federal-style Ephraim Cook house to which it is joined. 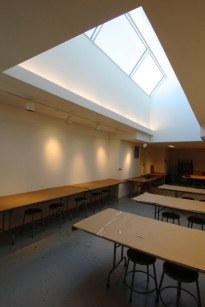 The Art Association was founded in 1914. Its first president, William Henry Young, was president of the Seamen’s Savings Bank. The first show, in 1915, was at Town Hall and included five paintings that were the nucleus of the permanent collection, by Charles Hawthorne, E. Ambrose Webster, William Halsall, Oscar Gieberich, and Gerrit Beneker. In 1919, the association bought the Solomon Bangs house, called Solomon’s Temple, at Bangs and Commercial. Two years later, it purchased No. 460 next door, originally the home of Ephraim Cook and more recently of William Bangs. Solomon’s Temple fell and the Cook house was renovated as a gallery that opened in 1921. The Hawthorne Memorial Gallery was built on the corner lot in 1942. Dr. Carl Murchison oversaw the 1960 addition of the column-free, 30-by-60-foot Hofmann Gallery. On the 50th anniversary, Ross Moffett’s history, Art in Narrow Streets, was published.

By the late 1990s, PAAM had become a museum with almost 2,000 artworks and not nearly enough space to store them properly. It operated year-round, but not comfortably. The antiquated physical plant was discouraging lenders, because PAAM could not guarantee ideal conditions for artworks. In 2003, PAAM’s president, Robert Henry, and executive director, Chris McCarthy, announced a $5 million expansion. The first phase, in 2004, restored the Cook house. The ground floor, formerly a reception area and gift shop, was turned into a new gallery. Next, from 2004 to 2005, the 1942 Hawthorne annex was replaced by the Ross wing. It added storage space, two new galleries, a new gift shop and reception area, and new second-floor studios for the art school. Not everyone was won over, but McCarthy said that if the annex hadn’t been built, the museum “would have fallen down or it would have closed.”