The Flagship, with its renowned and utterly improbable dory bar, is one of those cherished institutions that’s missed even by people who never knew it. Built and used at first by the artist E. Ambrose Webster (pictured at left) as an instructional studio, it was for many years the place to dine and drink in the East End. Its history is interwoven with that of the Beachcombers next door, at 465A Commercial. Part pier shed, part foundry, part wharf, part studio, it’s hard to tell where the Flagship leaves off and where the Beachcombers begin. For a time in the 1930s, the Flagship catered the Beachcomber dinners, making the distinction between them even tougher to discern. But the spirit of the Flagship endures, though it’s a private home now. And as long as there’s a dory bar in place, there will always be a Flagship.

Webster (1869-1935) purchased his home, at 180 Bradford Street, in 1900. The history of this building can traced to 1910, which is when Webster began constructing a studio for himself and his Summer School of Drawing and Painting, with rooms to house his students, according to Gail R. Scott’s richly illustrated biography, E. Ambrose Webster: Chasing the Sun (Hudson Hills Press, 2009). Part of what compelled him to do so was the insistence by his fiancée, Georgianna Rodgers, a trained nurse and Provincetown native, that he establish himself as an financially stable artist. Apparently he did so. They were wed in 1911.

Speaking of the beachfront property, Scott wrote: “The first floor contained the apartments he rented to students. Up a steep flight of outside stairs was the studio: a huge, high-ceilinged room with a northern exposure and a skylight in the center above the model’s stand.”

One tragic life whose path intersected the Webster studio apartments was that of Gan Kolski (1899-1932), a Polish-born Socialist whose artwork was featured in New Masses magazine. He lived in Greenwich Village but spent his last summer here. In April 1932, Kolski leapt to his death from the George Washington Bridge between Manhattan and Fort Lee, N.J., leaving behind this note: “If you cannot hear the cry of the starving millions, listen to the dead brothers. Your economic system is dead. Cremate me, fellows, and send the bill to Gan Kolski, of 78 Horatio Street.” When the police went to that address, they learned that victim and benefactor were the same man. In Garretts and Pretenders: A History of Bohemianism in America (Cosimo Classics, 2005), Albert Parry said that Kolski’s suicide — “a protest against the civilization that builds its bridges and starves its builders” — was the first from the new Hudson River crossing.

Two key events occurred in 1935. Webster died. And in the abutting “Hulk” — as the Beachcombers’ headquarters is known — Manuel Francis “Pat” Patrick (±1903-1964) opened the Flagship restaurant, replacing a Prohibition-era nightclub called the Ship. Three years later, the Flagship expanded westward into this, the old Webster art studio. Patrick spent the winter of 1937-1938 “picking up odds and ends of wrecks, beams, booms and buoys,” The Advocate reported. “He has prowled around forgotten attics and through ship graveyards picking up things nautical.” (“‘Pat Is Proud of New Flagship,” The Advocate, 19 May 1938.) It was at this time that the Webster studio received the distinctive portico, supported by ship’s knees, that marked the entrance to the Flagship, along with a “massive door in which is an old ship’s port-hole.” 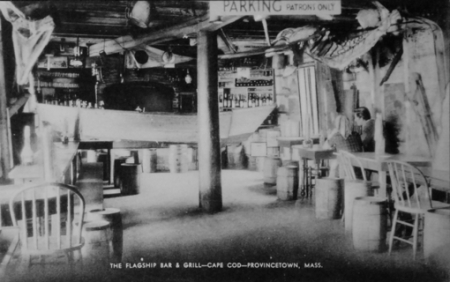 The dory bar dates to 1940, to judge from this contemporary account: “One of the main and interesting features is the new dory bar, similar to the bar in the Beachcombers’ section of the Flagship. On the prow is still the protecting boot heel nailed there by the last fisherman-owner of the dory.” Patrick also salvaged hand-hewn timbers from the Benjamin Lancy house at 104 Commercial Street and shutters from the Capt. Philip Cook house at 246 Commercial Street, which he installed as restroom partitions. “It has become impossible for him to look at a house except in terms of what he can tear out of it for use in the Flagship,” The Advocate said. (“Pat Does It Again at the Flagship,” The Advocate, 9 May 1940.)

Easily the most celebrated guest at the Flagship was the First Lady, Jacqueline Kennedy, who dined here on 31 August 1961 with Gore Vidal, a relative by marriage. (His mother had at one time been married to her step-father.) Patrick died in 1964, but the Flagship continued under the management of his widow, Hilda Winslow Patrick. In 1977, the restaurant was taken over by Ciro Cozzi, cofounder of Ciro & Sal’s. For a time in the 1990s, it was known as the Dancing Lobster. Napi Van Dereck was the last operator of the restaurant in the early 2000s, when it was called Jackson’s at the Flagship. He closed it after the 2004 season. 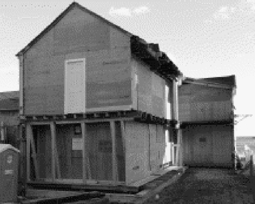 The Flagship was purchased in 2005 by Peter J. Petas, the president, chief operating officer and cofounder of CreditSights, an international investment research firm. In 2012, he and his partner, Ted Jones, began a transformative recreation of the property. “We have taken two bad additions off the front of the house and have revealed the original facade of the building as it was when it was built by E. Ambrose Webster in 1911,” Jones said in February 2012. “We have reduced the size of the house to its original configuration (plus the pier, of course), but are only able to recreate the original facade — not reveal or restore it — because it has been destroyed by past remodeling work. … We hope the end result looks like an old house, lives like an old house, but acts like a new one …. We are very pleased that low-profile solar panels to be installed on the pier roof promise to provide 100 percent of our electrical needs.” 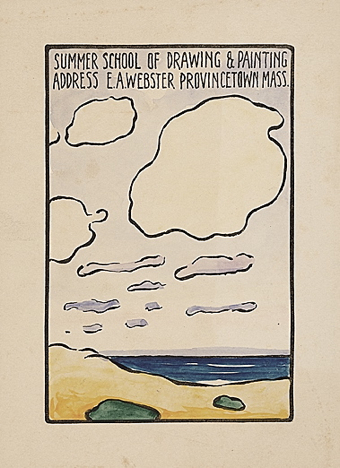 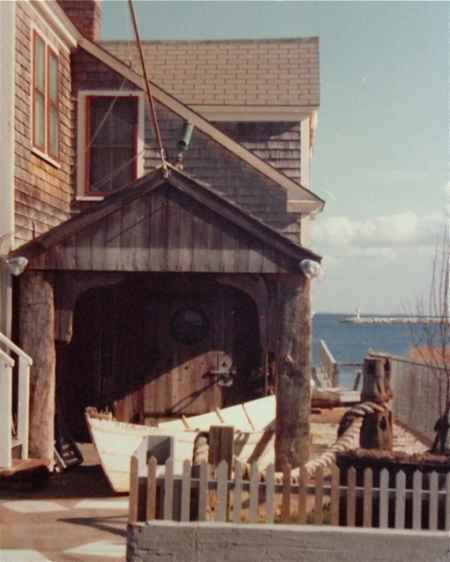 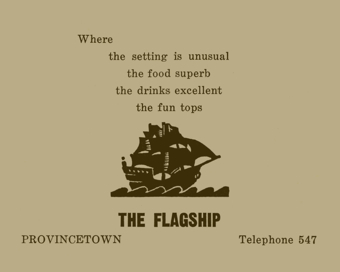 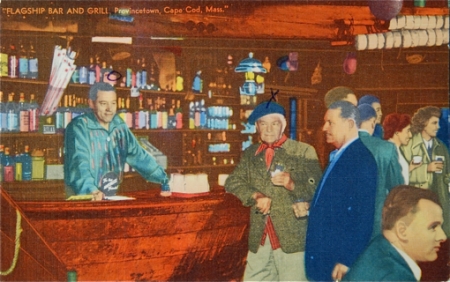 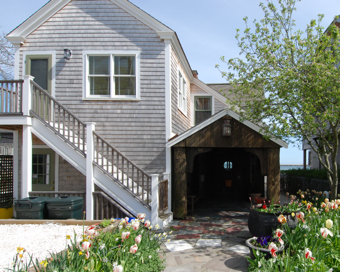 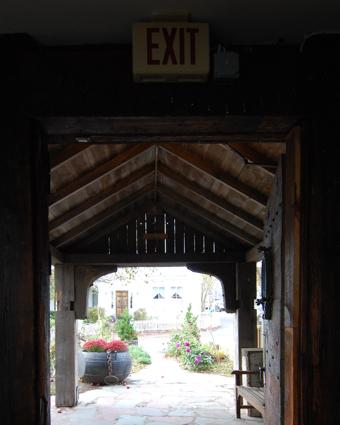 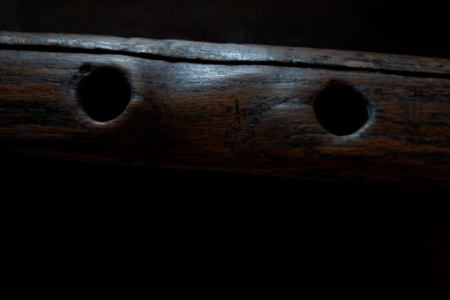 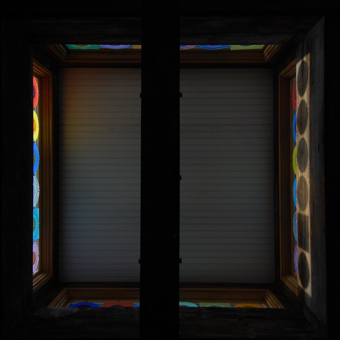 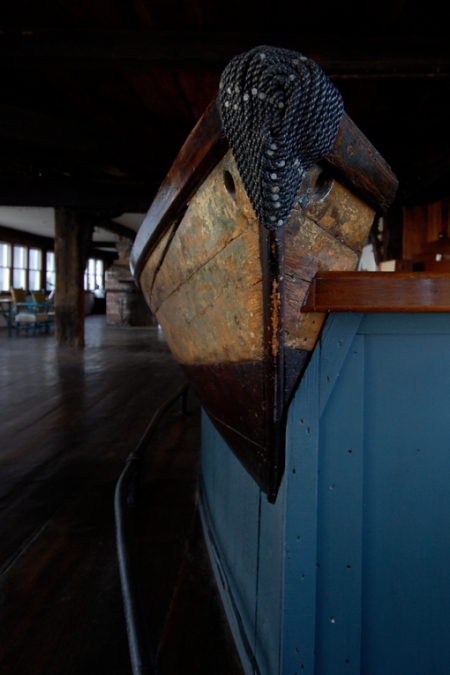 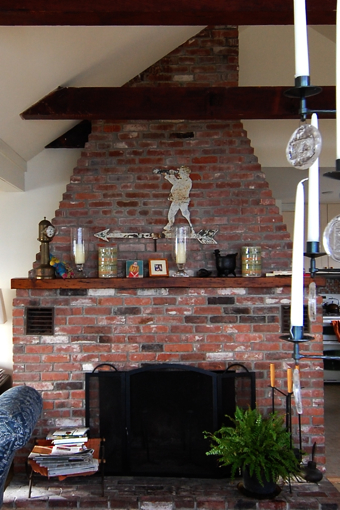